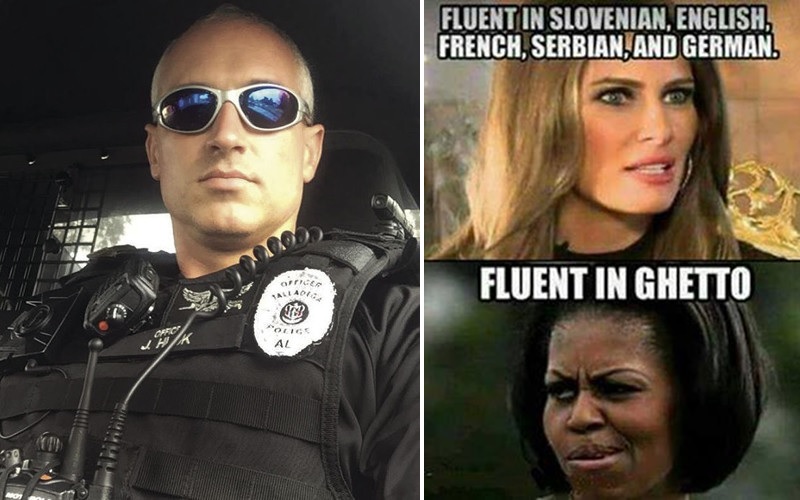 Another day, another racist comment aimed at Michelle Obama.

Joel Husk, an Alabama police officer, has been fired after racist memes he shared on his personal Facebook account went viral. Once such meme listed all of the languages future First Lady Melania Trump speaks, while current FLOTUS, Michelle Obama, is “Fluent in Ghetto.”

Here are some things you need to know about fired police officer Joel Husk.

Joel Husk, 37, was fired from the Talladega Police Department in Alabama on Nov. 16. Husk, a Donald Trump supporter, had reposted an offensive meme regarding Michelle Obama.

The meme that landed Husk in hot water on social media featured photos of Melania and Michelle. “Fluent in Slovenian, English, French, Serbian and German,” the meme described Melania. It then reads, “Fluent in Ghetto,” referring to Michelle, a graduate of Princeton and Harvard University. Husk reposted the meme from the page, Donald Trump, The Political Movement. Husk has since either deleted the post or made his profile private. He had worked on the Talladega force for about two and half years.

2. Husk has actually shared several other troubling memes, including one that states white people should be thanked for free slaves. This isn’t anything new for Joel Husk. He has posted several other memes that were racist or insensitive in nature. A repost from Last American Patriots shows a photo of dead bodies with the caption, “Over 620,000 white people died to free black slaves and still to this day not even 1 thank you.” Another showed Klansmen carrying a Confederate flag and comparing the Black Lives Matter movement to the KKK. He again characterized BLM as a terrorist group with a meme featuring President Barack Obama.

“Was Dallas a terrorist attack? Yes! Carried out by Obama’s own homegrown terrorist group!”

3. Talladega City Manager Patrick Bryant has ensured the community that Husk’s racists remarks do not represent the Talladega Police Department. The city manager was “incredibly disappointed and frustrated” by the memes posted by Husk and has made several statements to ensure the public that Husk does not represent the views or ideals of the Talladega Police Department.

“For the police especially, they have to guarantee the rights of everyone, regardless of race, creed, gender, religion, etc. Any time someone makes a statement like that that is biased, insensitive or derogatory, that reflects negatively on the department and all agencies of the city.

“Our responsibility is to our residents, to provide service to everyone. That especially includes law enforcement. The community trust them to provide a vital service fairly. If a comment or post reflects a level of bias that says they cannot provide that service fairly, then we have to act.

“I can’t control the actions of every employee, but I can uphold the standards that make us all proud of what we do every day.”

Husk has not apologized or commented on the matter.

4. The election of Donald Trump has spark several racially motivated incidents, including the rise of the “Alt-Right” movement and a WV mayor who commented on a post calling Michelle Obama an “ape in heels.” Racist incidents have seemingly erupted across the country since Donald Trump became the President-elect earlier this month. Similar to Husk, West Virginia mayor Beverly Whaling resigned after her comment on a Facebook post comparing Michelle Obama to an “ape in heels” sparked outrage.

Videos have shown teenagers chanting “build the wall” and “white power” in schools, a church in a Latino community was vandalized with the message “Trump Nation. White Power,” and several swastikas have been spotted.

A recent conference of white nationalists (which the media is now dubbing as “alt-right”) lead by “alt-right” leader Richard Spencer to celebrate Trump’s win concluded with the Nazi chant “Hail Trump, hail our people, hail victory!” and Nazi salutes.

This weekend, Neo-Nazi Richard Spencer (who coined the term "alt-right") led the crowd at his conference in DC in a "Heil Trump" chant. pic.twitter.com/X1qX0l3uKI

During a 60 Minutes interview, in a weak effort to denounce the spread of racism in his name, the President-elect simply said:

However, in light of the disturbing alt-right “Heil Trump” video, the Trump team released a statement late Monday (Nov. 21) night.

“President-elect Trump has continued to denounce racism of any kind, and he was elected because he will be a leader for every American. To think otherwise is a complete misrepresentation of the movement that united Americans from all backgrounds.”

5. Despite being the target of racist memes, Michelle Obama chooses to go high, when they go low. Joel Husk and Beverly Whaling are just two of many who hold racist views and feel emboldened by a Trump presidency. Michelle Obama is well-aware that she is the target of racist memes, but chooses to rise above the Husks and Whaling’s she may encounter.

She told Tuskegee University graduates in 2015:

“There was the first time I was on a magazine cover — it was a cartoon drawing of me with a huge Afro and machine gun,” she said. “Now, yeah, it was satire, but if I’m really being honest, it knocked me back a bit. It made me wonder, just how are people seeing me?

“Or you might remember the onstage celebratory fist bump between me and my husband after a primary win that was referred to as a ‘terrorist fist jab.’ And over the years, folks have used plenty of interesting words to describe me. One said I exhibited ‘a little bit of uppity-ism.’ Another noted that I was one of my husband’s ‘cronies of color.’ Cable news once charmingly referred to me as ‘Obama’s Baby Mama.’”

In the same commencement address, she noted how people have doubted her intelligence or assumed she was “the help.” Though such incidents are frustrating and exhausting she said it’s not an excuse to “throw up our hands and give up.”

Later that year, Michelle first gave her now-famous quote, “When they go low, I go high.”