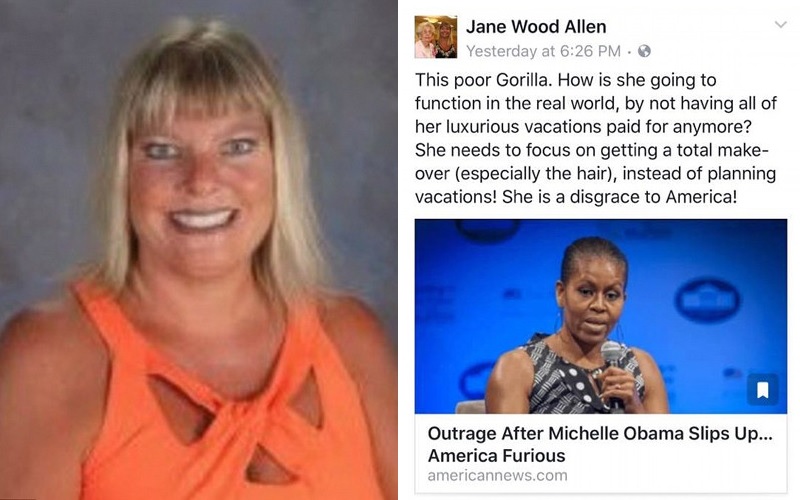 A Georgia teacher’s assistant was dragged on social media after her incredibly racist Facebook post about First Lady Michelle Obama went viral. She was subsequently fired from her position.

Here are a few things you need to about racist elementary “paraprofessional” Jane Wood Allen.

Jane Wood Allen’s racists ways were revealed to the world after she reposted an article from the website AmericanNews.com on her personal Facebook page. Along with the article, Allen wrote a caption claiming Michelle is a “disgrace to America” and refers to her as the “poor gorilla.” “This poor Gorilla. How is she going to function in the real world, by not having all of her luxurious vacations paid for anymore? She needs to focus on getting a total make-over (especially the hair), instead of planning vacations! She is a disgrace to America!”

The post went viral after Ph.D student Roni Dean-Burren shared screenshots and it has been shared by hundreds of users. Allen has since deleted the posts but the internet never forgets (with the help of screenshots, of course). Her account is also no longer searchable on Facebook.

2. The 27-year veteran was fired, as Forsyth County Schools says it does not tolerate racism and discrimination.

Allen has been a teacher’s aide for Forsyth County Schools for 27 years. She worked at Chestatee Elementary School in Gainesville at the time her racist post went viral. The post caught traction as Forsyth schools were on fall break and a spokesperson for the school district informed press the issue would be addressed the following week.

It was confirmed on Monday (Oct. 3) that Allen had been fired from the school system. Forsyth County Schools released the following statement on its official Facebook page.

3. Allen has previously made racist, anti-Muslim, anti-Hispanic, and ignorant comments on Facebook.

This is also not the first time Allen has posted racist and ignorant remarks. She previously wrote that a Muslim woman had “no business in the USA,” mocked a child’s name, has expressed anti-Hispanic sentiments, and again, compared the First Lady to a gorilla back in August. 4. Many people on social media immediately called out Allen and advocated for her termination.

@ChestateeES You can't let Jane Wood Allen teach in your school,she's poisoning your children with her hatred and racism

@FCSchoolsGA I really hope all of your teachers aren't racists. Jane Wood Allen should be fired and never allowed around children!

@FCSchoolsGA, your teacher, Jane Wood Allen of Chestatee Elementary School, referred to our first lady as a "gorilla." Egregious.

5. Another educator in the same district was put on leave earlier this year for sharing anti-Muslim posts on Facebook. According to the Forsyth County News, this isn’t the first time an employee in the school district faced disciplinary action for some questionable social media behavior. In February, Lambert High School principal Gary Davison was placed on leave for sharing some Islamophobic memes on—you guessed it—Facebook.

This isn’t the first time an employee in the Forsyth County School District has been disciplined for questionable behavior on social media. Back in February, Lambert High School principal Gary Davison was placed on leave after he shared several anti-Muslim memes on Facebook. Other negative posts on his page were directed towards the LGBT community, Caitlyn Jenner and Planned Parenthood. He was suspended for a couple weeks and allowed to return after “much thought, careful consideration and meeting” with him. Davison has since apologized for his posts.