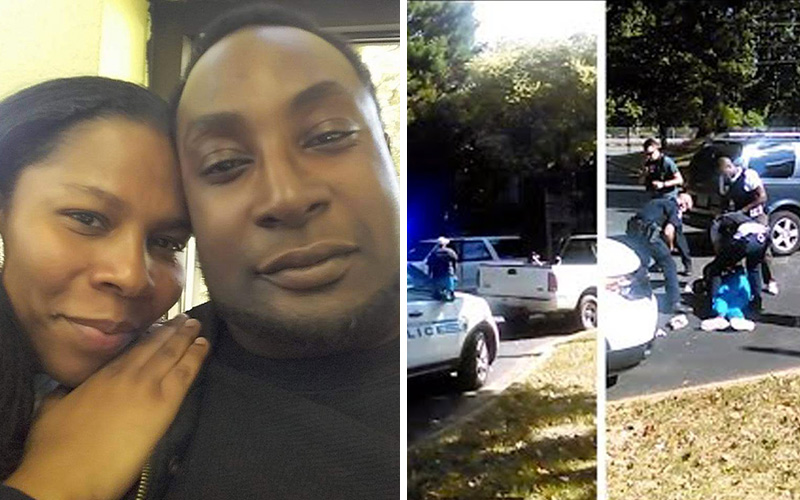 Cell phone video footage recorded by Keith Lamont Scott’s wife, Rakeyia Scott, has been released, and it shows Scott’s fatal shooting as it unfolded at an apartment complex in Charlotte, North Carolina on Tuesday (Sep. 20).

In the 2-minute clip, which was released to the media by lawyers for the Scott family, Rakeyia Scott can be heard behind the camera begging and pleading with officers not to shoot her husband, who she noted was disabled after suffering a “TBI,” or Traumatic Brain Injury.

Though the video doesn’t doesn’t include a video of the shooting itself, nor does it answer the question of whether or not Keith Scott had a gun that he was pointing at officers (a story police have stuck to since the beginning), Justin Bamberg, an attorney for Scott’s family, said that it does provide the public with “another vantage point” of the incident.

Bamberg said that he hoped the Charlotte-Mecklenburg Police Department would release their own videos of the shooting, something protestors, activists, community leaders and the media have been requesting since the shooting happened Tuesday afternoon.

The lawyers for Scott’s family said Scott had parked his car in a visitor’s space in their apartment complex, where he typically waited for one of his kids to come home from school via bus. Police have said they were in the area serving a warrant on someone else.

Scott’s family’s lawyers said Mrs. Scott exited their apartment with a cellphone charger for her husband when she noticed his truck was surrounded by officers.

Charlotte-Mecklenburg Police Chief Kerr Putney said the officers felt their lives were in danger when they fired at Scott.

Here is a full transcript of the dialogue in the video (via NYT):

RAKEYIA SCOTT: He didn’t do anything.

RAKEYIA SCOTT: He doesn’t have a gun. He has a T.B.I. (Traumatic Brain Injury).

RAKEYIA SCOTT: He is not going to do anything to you guys.

OFFICER: Drop the gun. Let me get a f**king baton over here. [muffled]

RAKEYIA SCOTT: Keith, don’t let them break the windows. Come on out the car.

RAKEYIA SCOTT: Keith! Don’t you do it.

OFFICER: Is everybody good? Are you good?

RAKEYIA SCOTT: He good. Nobody … touch nobody, so they’re all good.