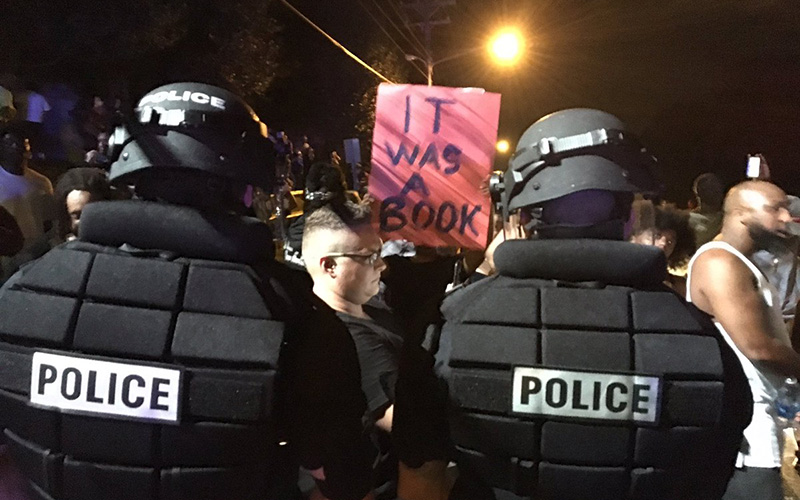 Protests are erupting in Charlotte, North Carolina tonight over the officer-involved shooting resulting in the death of a black man named Keith Lamont Scott earlier today.

Protesters stare down officers one holding a sign "it was a book" family claims the man police killed had a book, not a weapon @wsoctv pic.twitter.com/qnMfo63dNy

Facebook user Mills Shaka Zulu Gill has been live streaming near the scene of the shooting since around 6 p.m.

Watch his live feed videos below:

And here are more live feed videos from the news:

According to reports, police officers used tear gas on protesters, who were seen in live video feeds surrounding and damaging police cars.

Charlotte-Mecklenburg police officer Brentley Vinson has been identified as the cop who fatally shot Keith Lamont Scott Tuesday afternoon (Sep. 20) in the parking lot of an apartment complex in University City.

Officers said they were looking for someone with an outstanding police warrant in the apartment complex when they saw Scott coming in and out of his car with what they described as a gun.

According to a statement from police, the officers alleged that Scott “posed an imminent deadly threat to the officers, who subsequently fired their weapon striking the subject” after he exited his vehicle a second time with a gun and they shot him on sight. The 43-year-old father was pronounced dead after being rushed to the hospital.

Meanwhile, Scott was not the guy police were looking for, and his friends and family are adamant that he was not carrying a gun and was simply reading while waiting for his son to be dropped off at the bus stop.

Scott’s daughter Lyric posted a live video showing the aftermath of the shooting that immediately went viral and brought national attention to the shooting.

“Oh my gosh y’all, look… the police just shot my daddy four times for being black,” she says at the beginning of the hour-long live video stream. “They tased him first and then shot him.”