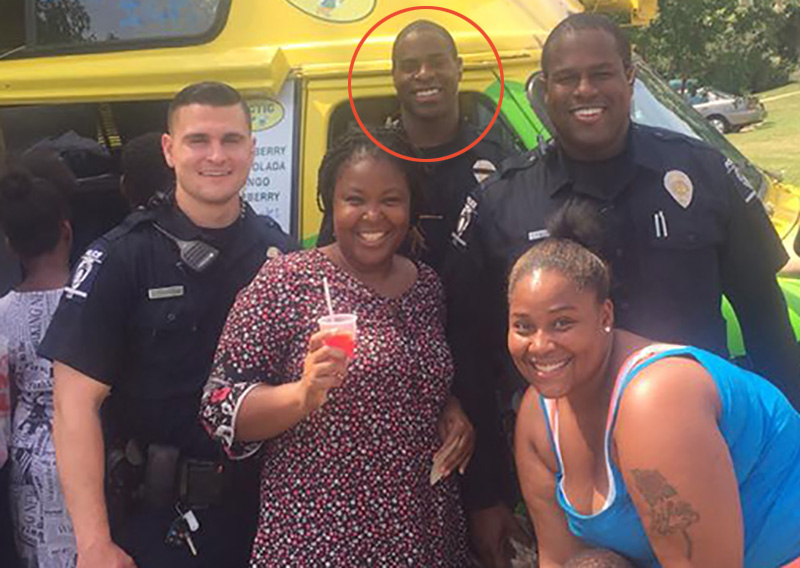 Charlotte police officer Brentley Vinson has been identified as the cop responsible for the shooting death of Keith Lamont Scott in North Carolina, WJZY reports.

The Charlotte-Mecklenburg Police Department released the cop’s name as protests erupt over the city over the killing of Keith Scott, yet another senseless black death at the hands of a police officer.

Officer Brentley Vinson is pictured below, second from the left (tall black guy in the back): This photo was posted to CMPD’s Facebook page back in July along with the following caption:

An anonymous donor sent an ice cream truck into the Dillehay neighborhood. Some of the neighbors were still without electricity following the power outage.

According to reports, police were executing a search warrant at The Village at College Downs apartment complex when they came across Scott, who police said had a gun but was not the person they were initially seeking with the warrant.

Police said they approached Scott after observing him exit and then re-enter his vehicle with a gun. The man then allegedly exited the vehicle once again with the gun as police approached the car, and was deemed “an imminent deadly threat to the officers,” when then “fired their weapon,” police said in a statement, according to the Charlotte Observer.

Police noted that they recovered a gun at the scene, though Scott’s family and friends are denying claims that he had a gun, saying he was only reading a book while waiting for his son to be dropped off at the bus stop. His daughter, Lyric Scott, posted two Facebook Live videos showing the aftermath of the shooting that has since gone viral. Her Facebook page has been deleted, however, we were able to re-upload the videos on YouTube.

A number of protests have erupted over the shooting and are currently being streamed all over the internet via Facebook Live.

According to WJZY, Officer Brentley Vinson, who has been employed with the Charlotte-Mecklenburg Police Department since July 2014, has been placed on paid Administrative Leave, which is standard procedure with any officer-involved shooting.

*** Editor’s Note: An earlier version of this article incorrectly used a cropped photo showing the wrong officer. We have since pointed out the correct officer in the image and regret the serious error.