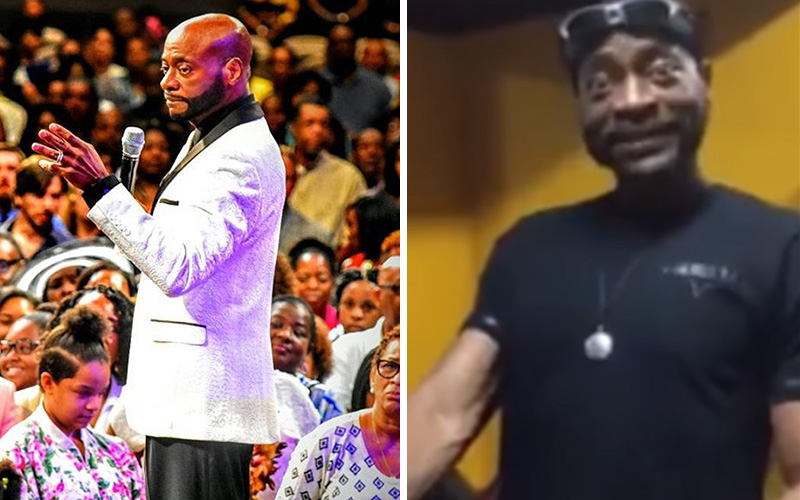 Bishop Eddie Long has reportedly been hospitalized with a “grave illness” and is said to be fighting for his life.

Last month, the controversial pastor appeared in a video showing off a shocking new slim physique that had us all scratching our heads and asking questions. According to Long, his dramatic weight loss was the result of a new diet that consisted of him eating raw vegetables instead of foods that could be found on what he called the “slave menu” (i.e. unhealthy soul food).

Though Bishop Long is attributing his rapid weight loss to healthier eating, he’s likely hiding what exactly inspired him to change his diet, and it apparently has something to do with a “grave illness” that is believed to be HIV/AIDS (or, at the very least, cancer).

One report from Obnoxious TV claims the infamous bishop hasn’t preached in months and he’s been told by doctors that he “only has months to live” due to him having HIV/AIDS.

Obnoxious Media just received word that Bishop Eddie Lee Long – who has recently been in the news and on our blog – has what is being described as AIDS. Obviously, since we are not able to confirm that 100%, we’re going to leave it as an “Obnoxious Report!“. Let’s clear, we are NOT suggesting, nor implying, that we have access to Bishop Eddie Lee Long’s medical records nor do we know his “true” diagnosis.

However, this is what we do know – Bishop Long has been publicly and privately accused of being bi-sexual (publicly: the five young men came forward and admitted their sexual relations with the infamous Bishop; privately: his church admins walking in on him bending “men” over in his office with the KY Jelly on the desk).

In the public lawsuit, four of the five men sued him, and Eddie settled out of court for an undisclosed amount of money: It was rumored they were paid $20 million dollars (Ha! The lawyer was paid the most and left the boys eligible for food stamps). In the past, Eddie Long has purchased countless numbers of cars, homes, paid rent, sponsored shopping sprees, etc., for young men in Atlanta but was more partial to college men.

Recently, while having dinner at one of my favorite eateries with some prominent clergymen, our table was bombarded by an anonymous source who wanted the undivided attention of Sir William, and, in a very humble and polite manner, asked if there was room at the table to join us. Quite naturally, we opened a space to accommodate this person, and it was shared that as a faithful member of New Birth that they had a great deal of respect for Bishop Long and pleaded with me to take it easy on the bishop due to his having cancer (Code Alert: Cancer will ALWAYS be the culprit when it’s really AIDS, but that’s just my opinion).

After a couple of confirming phone calls and text messages, it was proven that the source is very reliable. It was explained that Bishop Long has cancer (hmmph) in his digestive system and it was discovered in the 4th stage and he literally has months to live. This person went on to say that Bishop felt the need to do the “healthy living” video since he was wasting away and had been absent from the pulpit for nearly 3 months. He now needs assistance from his wife, Vanessa, to walk in and out of the services.

Bishop Long has been doing everything he can to live spiritually as well as naturally. He is on a total liquid diet because he cannot digest food at all and even went to see Prophet E. Vernard Jordan for prayer and Spiritual Guidance. While at Jordan’s house, an African Prophet was called to pray and cast out the demonic spirit on Bishop Eddie Long. According to the source, the prophet called the name of a man that was said to have been very close to Bishop Long and may have infected him with a dreadful disease.

Bishop Long has been admitted to an Atlanta hospital this week where he has been since Monday, and not yet been discharged. The reliable source also stated that the doctors have given Bishop a “date of death” and the only prognosis is to make him comfortable. Being the “sling-shot” fighter that he proclaims he is (we saw how that manifested), Bishop Long is not willing to accept that he is ill and is quoting the scripture that life and death lies in the power of the tongue. Yes, he is quoting scriptures on his deathbed with the same tongue he used to perform sexually explicit perks on men instead of his wife, according to the lawsuits filed by four of the five guys that came forward accusing the Bishop of being sexually involved with him.

The Christian Post, who reported on the story from Obnoxious TV, called New Birth Missionary Baptist Church on Monday (Sep. 5), however a phone message notified them that the church wasn’t open at the time. “A message left for the minister on call for urgent matters was not returned,” CP reported.

Bishop Long has since released a statement confirming that he is “recovering from a health challenge” and asking that we respect his privacy.

The full statement, published on a digital letter head with the phrases “Rise Up!” and “Love Live Lead Like Christ!” on it, reads:

“I am recovering from a health challenge that I trust God to deliver me from. It is unrelated to the eating for life diet consisting of mostly raw vegetables that I am continuing, as part of a holistic approach to good health.

“At this time my family and I are requesting that you respect our privacy. I truly appreciate your prayers and support for me, my loved ones and my beloved New Birth Church Family.”