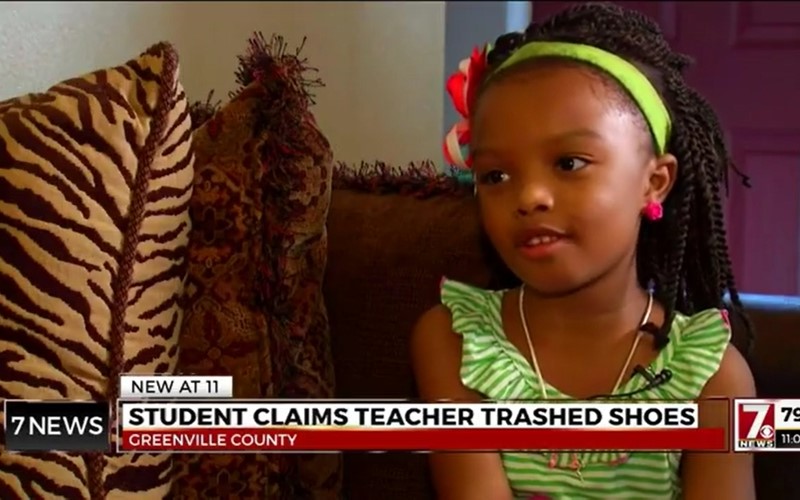 A Simpsonville, South Carolina teacher probably won’t get anything for Teacher Appreciation Day other than a side-eye. The teacher is in hot water after throwing away a first-grader’s shoes, forcing the 6-year-old to walk around barefoot.

6-year-old Taraji Edwards says the unusual punishment occurred after the teacher asked her 7 or 8 times to stop fiddling with her sandal straps. However, Taraji continued because the straps were bothering her.

The teacher demanded Edwards to take them off and then threw the into the trashcan. Taraji was forced to walk around barefoot until the teacher allowed her to grab them out of the garbage herself.

“I feel embarrassed, and I did not like how she treated me… that’s not a way I can make friends… I do not want to get treated like that; I’m only six.”

Taraji parents learned of the incident after the little girl began to cry when her mother asked her to wear the sandals. Like any parent, Chartrese Edwards is angry.

“This is not a norm and I am angry because I feel it was very malicious… I feel like it was malicious behavior. I’m angry about it because you could have used a better method.”

Chartrese talked to the principal and told the teacher to leave the shoes alone. She now questions whether to even send Taraji back to the school. The family has started a GoFundMe page to help send Taraji to private school.

Greenville County Schools released a statement condemning the teacher’s actions, but did not go into details of any disciplinary actions. The teacher’s name was also not released.

No 6-year-old should ever have to feel embarrassed, especially by a teacher. As far as I’m concerned, the teacher was the bad apple in this situation. I hope every teacher gives him/her the shadiest side-eye every time they walk into the teacher’s lounge.