GOSSIPONTHIS.COM Pop Culture Did Rihanna Really Curve Drake at the VMAs After He Professed His... 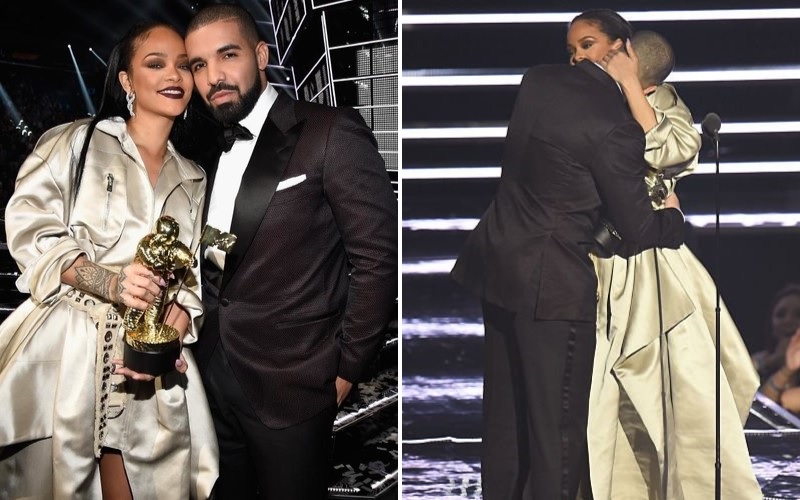 The moment we were all not-so-secretly waiting for almost happened, but didn’t.

“She’s someone I’ve been in love with since I was 22 years old,” Drake said while presenting Rihanna with the Michael Jackson Vanguard Award at the MTV VMAs. The two have long been rumored to be an item and some thought (including me) this would be the night they made it official.

As he handed her the award, the rapper seemed to lean in for a kiss, but Rihanna definitely cave him the curve on national TV.

It wasn’t quite what Twitter expected and social media reacted to all the awkwardness we witnessed.

Drake: "I've been in love with her since I was 22" Rihanna: "Thank you Drake for that amazing speech" pic.twitter.com/aiUJVHr7xp

So @Drake bought @rihanna a billboard and he still couldn't get a kiss on live TV? #VMAs pic.twitter.com/85xPr6PAvn

When #Drake tell #Rihanna he's been "in love w her since he was 22" and she responds w "thanks for a great speech". pic.twitter.com/dEh68E0ube

However, alternate angles of the VMA moment show Drake might have gotten a little peck on the lips. Videos from the rest of the night also show Rihanna and Drake putting on the PDA.

Ahead of the Rihanna’s big VMA night, Drake basically professed his love with a billboard congratulating the singer. While it’s probably best to keep their relationship as private as possible, I think they can only hide for so long. They’re so cute together; even the curve was adorable.