GOSSIPONTHIS.COM News Vigilante Justice: Dylann Roof and George Zimmerman Both Beat Up in the... 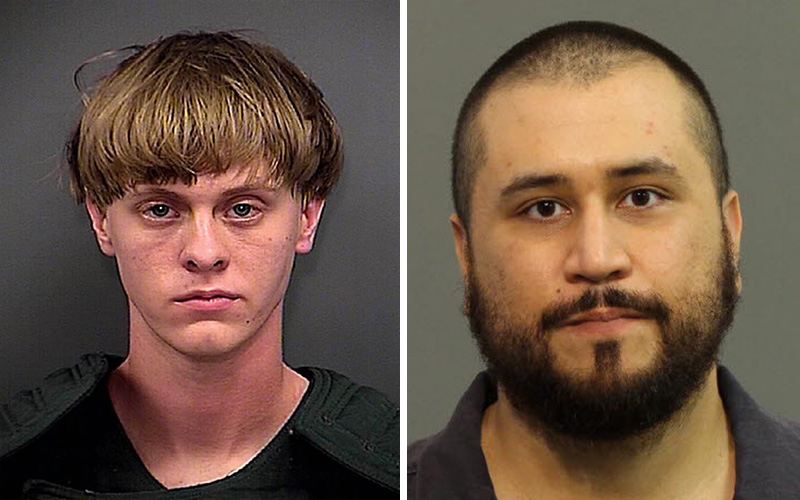 Dylann Roof and George Zimmerman both got what they deserved last week as the two of them were served healthy doses of some good ole vigilante justice. And it honestly couldn’t have come at a better time.

On the morning of Thursday, August 4th 2016, Dylann Roof — the racist white man who shot and killed nine black people at a church in Charleston last year — was attacked by a black inmate at the Charleston County jail in South Carolina where he’s being held as he awaits trial.

According to police, after Roof went into the shower around 7:45 a.m. Thursday morning, fellow inmate Dwayne Stafford was somehow able to dart out of his cell, rush down the stairs and hit Roof, bruising his face and back.

Roof, 22, was reportedly examined by jail medical personnel before being returned to his cell.

Authorities initially planned to charge Stafford with assault, however, Charleston County Sheriff Al Cannon said that Roof and his attorneys were against pressing charges.

Stafford, who is 26 years old, is awaiting trial to face charges for first-degree assault and strong armed robbery.

As social media rejoiced over the news of Dylann Roof’s surprise attack, in came some more news to be happy about: George Zimmerman had been punched in the face earlier that very same week for reportedly “bragging” about murdering Trayvon Martin.

George Zimmerman, who was acquitted of murder after shooting and killing 17-year-old Trayvon Martin in 2012, was at the restaurant with family celebrating a 12-year-old’s birthday, he told the Orlando Sentinel. He also told the Florida newspaper how everything went down. Or at the very least, HIS side of the story:

Zimmerman said he was ordering food at Gators Riverside Grille Sunday evening when he walked by a table with several people and complimented a man’s Confederate flag tattoos, according to the Seminole County Sheriff’s Office.

The man, Joseph Whitmer, thanked him and asked, “aren’t you that guy?” Zimmerman said yes and pulled out his ID to prove who he was, a report shows. Whitmer asked about the Trayvon Martin case and as Zimmerman started to explain that he fatally shot the unarmed teen in self-defense, another man walked up and asked, “You’re bragging about that?”

Zimmerman told the man he wasn’t looking for any trouble and that’s when the man punched him in the face, breaking his glasses, records show. Restaurant staffers broke up the scuffle. Zimmerman then called 911.

“This man just punched me in the face,” he told a dispatcher. “…He said he was going to kill me. You need to send three or four cops.”

He said the man and about five of his friends were holding him back. The man then fled in a blue Harley-Davidson motorcycle. A Sheriff’s Office spokeswoman said they are still attempting to locate the man, who could face a battery charge. Zimmerman told the dispatcher he was injured and needed paramedics.

And you would think the story ends there right? Nope. It doesn’t. In fact, there are several different versions of events going around, the Sentinel reported.

Whitmer’s wife said Zimmerman approached them while they were eating and said “Hey, I like your racist tattoos,” records show. He then told them about killing Trayvon “to brag,” a report states.

Another witness who was at Whitmer’s table said he also asked Zimmerman to leave their table. He said he had an issue after “Zimmerman came to his table and proceeded to brag about how he was the one who killed Trayvon Martin,” an incident report states.

Zimmerman says the incident occurred due to a “miscommunication” and he believes the man who punched him in the face was drunk.

He said he thinks the man thought he was Matthew Apperson, who was accused of shooting at Zimmerman during a road-rage confrontation in May 2015 in Lake Mary.

Zimmerman said the man told him to go away and accused him of “shooting George Zimmerman,” prompting the fight.

Ed Winters, the owner of the restaurant where the incident happened, has a completely different story.

He said the incident started when Zimmerman approached a shirtless patron who had just come in from the St. Johns River and told him he didn’t like one of his tattoos. After a few words, Zimmerman walked back to his table.

A friend of the first man to approach Zimmerman — who was at the restaurant with family celebrating a 12-year-old’s birthday — walked over to Zimmerman to confront him, Winters said. The two argued, but no punches were thrown, Winters said.

The two shoved each other, but Winters said claims of anything further are “blown out of proportion.” Winters said Zimmerman called 911, prompting a full-fledged response from the police and fire department.

It sounds like George Zimmerman is making a big deal out of nothing.

The fact that he even refers to himself as “that guy who killed Trayvon Martin” is not only disgusting, but I believe that it warrants for him to be able to face whatever vigilante justice he has coming to him in the future. Because “Eddie” sure isn’t the only person in the world who would like to punch George Zimmerman in the face. Or worse.

Meanwhile, Dwayne Stafford — the hero who beat up Dylann Roof — was released from the Charleston County Detention Center on Friday (Aug. 5) after posting $100,000 bond over the weekend, the New York Daily News reported Saturday.

Stafford had been in jail since being arrested in January 2015, and after attacking Roof, he gained a number of fans on social media who organized a fundraiser to donate money to Stafford and explained how to write him in jail.

Roof will remain in jail as he awaits both state and federal trials, and he faces the death penalty in both cases.

While violence of any form shouldn’t be “celebrated” (even if the recipient of said violence deserves it), when it comes to blatantly racists like George Zimmerman and Dylann Roof, you can’t help but to rejoice in their misery, especially when you consider the fact that one of them got away with their crime.