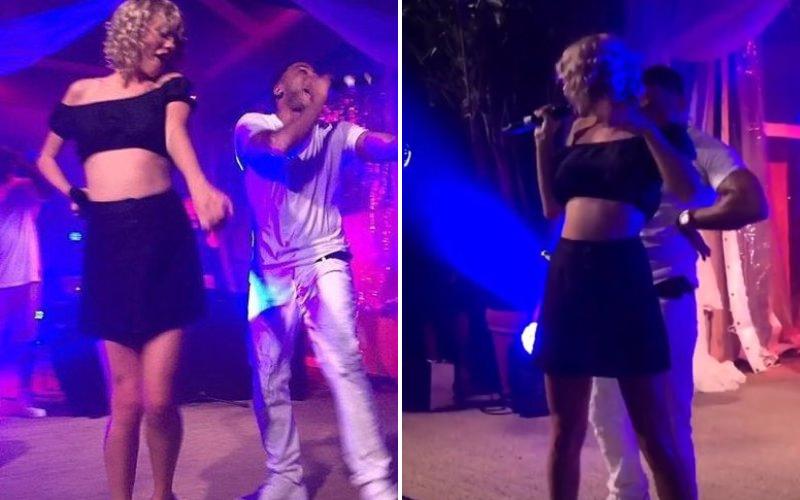 Taylor Swift has finally found a rapper she can feel safe with. Unfortunately, it’s at the expense of a classic song of the 2000s.

While attending model Karlie Kloss’ birthday party in the Hamptons over the weekend, Swift joined Nelly onstage to perform his 2002 hit with Kelly Rowland, “Dilemma.”

Only press play if your ears can handle Swift ruining Rowland’s beautiful hook and chorus.

Looks like Nelly pulled Taylor up on stage for an impromptu jam to his song Dilemma! pic.twitter.com/YkuOV3MwjM

In utter confusion and anger, Rowland is probably somewhere right now trying to text Nelly via Microsoft Excel and getting frustrated after getting no response. But back to Swift. The songstress has been in hiding since Kim Kardashian and Kanye West exposed her as liar after she claimed she had no previous knowledge of being referenced in West’s song, “Famous.” Video footage released by Kardashian shows that she not only knew about the song, but also gave West her blessing.

Social media had a field day with the juicy information and created the hilarious hashtag #KimExposedTaylorParty. Other than a few paparazzi photos, Swift has been under the radar ever since.

However, she definitely did not need to make a public comeback by singing Rowland’s part on “Dilemma.” It would have been better if she rapped one of Nelly’s verses. Better yet, she should have just stuck to her awkward dance moves and called it a day.