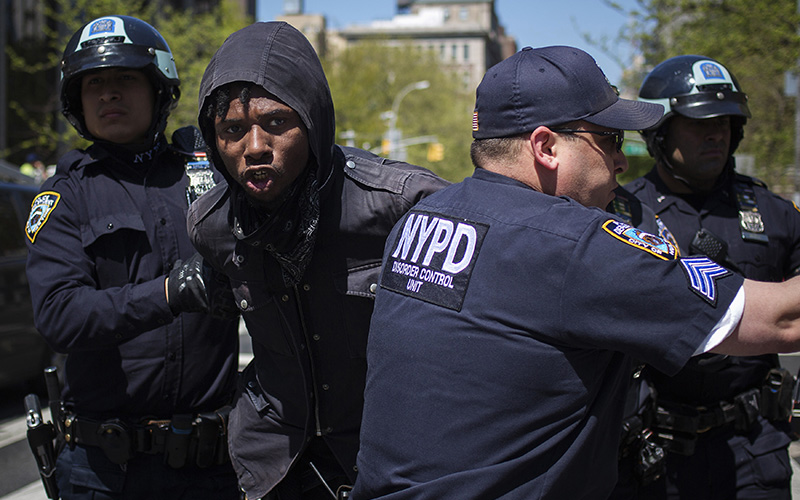 While the country is still reeling from the recent shooting deaths of two black men by law enforcement, another case is garnering attention — that of a former NYPD transit officer, Michael Birch (He has since been transferred), who has filed a lawsuit against the city and several NYPD officials (including NYPD commissioner Bill Bratton; former commissioner Ray Kelly; and NYPD Transit Bureau Chief Joseph Fox).

Birch is “alleging that he was retaliated against for speaking out about what he calls an illegal quota system.”

During a 2012 performance evaluation, Birch claims Constantin Tsachas (also named in the suit), former commanding officer of Transit District 32 and Birch’s superior at the time, appeared to be instructing him to issue summonses to black men more often.

Birch secretly recorded the evaluation. You can hear a brief snippet of the recording (via Gawker) below. There’s also a transcript of the conversation below the audio player.

Commanding Officer: Who commits the crimes in the city?

Birch: Who commits the crimes? Well, it’s mostly teenagers, anywhere between the ages of 15 and 19, mostly male blacks and Hispanics.

OK. Who are you stopping?

Everybody. I stop everybody.

Fifty-four TABs up to 8/20. Twenty-five of those are female. Half.

Like I said, I stop everybody. I’m not targeting anybody.

You just told me who the bad guys are.

Yeah, I know that. But there’s also other people who are committing violations as well. I’m not saying that there’s not violations being made.

The male blacks, that you told me commit the crimes—

Plenty of people that I write summonses to are male blacks and male Hispanics.

8/20. From January 1st to August 20th. Fifty-four TABs: two male blacks, seven Hispanics, seven other, ten white, three Asian. So where are you targeting the perps that you just told me?

Like I said, if I don’t see a perp jumping over the turnstile, what am I supposed to do to him?

These people are not going to pop.

How do I know that? A female Hispanic that I stopped in Sheepshead Bay did pop, actually, for a warrant, and I arrested her. Female Hispanic. The Hispanics that we’re supposed to be going after. That are committing the crimes. The people that I—

Did you think that she was going to pop?

Did I think she was going to pop? I didn’t put no thought into it. If you come up for a collar, I’m taking you in.

Here’s what I see. You just described to me who’s committing the crimes. You’re fully aware of it. But you’re not targeting those people.

I am. I’m targeting everybody.

Whoever is out there. If I—

So you only saw two male blacks jump the turnstile?

That is what you have. That is not disputed here.

I’m saying, we’re also talking Hispanics as well. I stopped a lot of Hispanics, too.

Seven male Hispanics. But more than half are female.

And like I said, everybody’s committing violations in front of me.

On the tape, Birch admits that while most crimes are committed by black and Hispanic teenagers, he stops everybody.

“Here’s what I see. You just described to me who’s committing the crimes. You’re fully aware of it. But you’re not targeting those people,” Tsachas stated.

Neither Tsachas — who was recently promoted from captain to deputy inspector — or the NYPD press office have responded to request for comments, according to Gawker.

“I was not only shocked, I was mad. My last name is Birch. I look white. They didn’t realize I was a Puerto Rican kid, and they’re just saying this to me like it’s OK. It’s OK, we’re amongst friends,” Birch told Gawker.

According to the New York Daily News, the suit alleges that “Birch was deprived of overtime, given undesirable assignments and had his work monitored as a result of not meeting the performance measures which the suit contends is a code word for illegal quotas.”

Birch filed his lawsuit in January of this year, but it was subsequently dismissed by Federal Judge Brian Cogan because the statute of limitations had passed on many of his claims. Birch filed an appeal with the higher court in June.

Birch’s attorney, John Scola, is also representing the “NYPD 12,” a group of uniformed minority officers who are embroiled in a class-action lawsuit against the city regarding the use of quotas in policing. Among them is Officer Edwin Raymond, who says Tsachas barred him from being promoted.

“The targeting of minorities by the NYPD has caused so many problems throughout our city yet the NYPD continues to promote officers who engage in these activities,” Scola said.