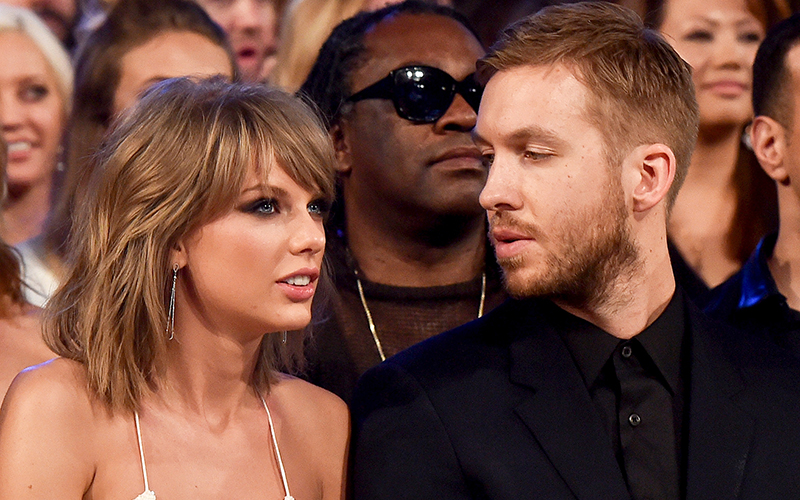 There’s a new chapter in the ongoing breakup drama between DJ/music producer Calvin Harris and his ex, singer/songwriter Taylor Swift.

Harris threw a bit of a Twitter tantrum today after the news broke that Swift penned the lyrics to Harris’ latest collaboration with Rihanna, “This is What You Came For.”

Harris has remained mum following his sudden break up with Swift back in June. The couple dated for 15 months before calling it quits. Now it seems that mixing business with pleasure could have led to the downfall of their relationship.

Harris appeared on Ryan Seacrest’s radio show back in April to promote the single’s release. Seacrest asked Harris “Will you do a collaboration with your girlfriend?” Calvin responded, “You know we haven’t even spoken about it. I can’t see it happening though.”

This obviously didn’t sit well with Swift because a rep for the singer told People, “Taylor Swift wrote ‘This Is What You Came For’ under the pseudonym Nils Sjoberg.”

Taylor Swift wrote Calvin Harris and Rihanna's hit 'This Is What You Came For, rep confirms https://t.co/FfYluJDG2E pic.twitter.com/S1oiGxIkfq

Harris isn’t denying Swift’s involvement but appears peeved that she has suddenly chosen to out herself as the sole creative force behind the song that gave Harris his first US number-one single on the Billboard Hot 100.

Harris then took a swipe at Swift and her new boyfriend, actor Tom Hiddleston, 35, (Thor, The Avengers) who have been nauseatingly flaunting their PDA across the globe since they began dating just weeks after Harris and Swift called it quits. Hiddleston even donned an “I Heart T.S.” tank top during Swift’s annual 4th of July party with her infamous “Girl Squad” at her Providence, R.I. compound.

The new couple’s too fast, too furious romance has had many people questioning if their relationship isn’t more show (to generate press for themselves and upcoming projects) than go.

In a 2014 Rolling Stone interview, Swift was asked about the inspiration for her song “Bad Blood,” and although Swift never mentioned Perry by name, it was the worst-kept secret in the music industry at the time.

“For years, I was never sure if we were friends or not,” she said. “She would come up to me at awards shows and say something and walk away and I would think, ‘Are we friends, or did she just give me the harshest insult of my life?'” Swift went on to hint at a business-related dust-up that led her to believe “we’re just straight-up enemies.”

Katy Perry weighed in once Harris pulled her into the fray.

Later, Perry retweeted a post from May 9, 2015, around the time of Swift’s Rolling Stone interview.

After calling out his ex, Harris left things on a cordial note.

It’s unclear why Swift would choose to bring her collaboration with Harris to light NOW, but Swift obviously feels it’s time to give credit where credit is due. Or, in the very least, this could be an attempt by Swift to rub some salt in Harris’ wound regarding their split.

Who knew such a petite woman could have such a strong arm? Whatever Swifty’s motives may be, one thing is certain — where Taylor Swift is concerned, Tom Hiddleston might be willing to lay down and take it but Calvin Harris isn’t.

Do you think Calvin Harris is just trying to save face and get back at his ex? Is Taylor Swift right to cop to the collaboration, even though the two agreed to keep her contribution quiet?