GOSSIPONTHIS.COM News Everything You Should Know About the Dallas Police Shooting Massacre 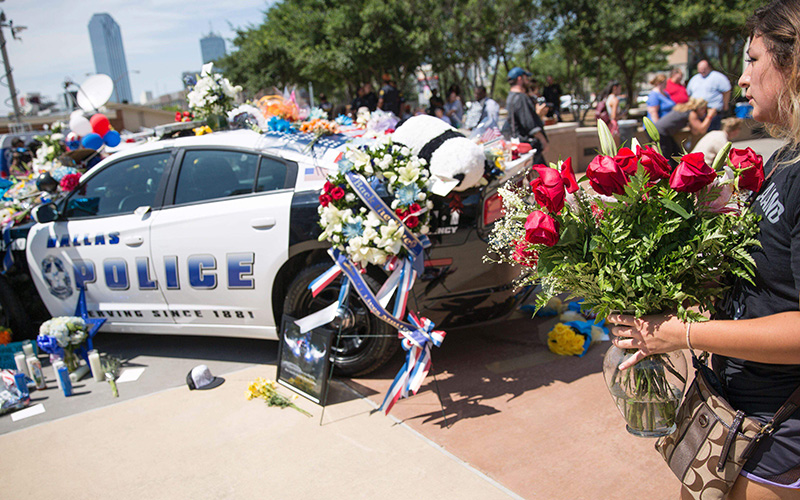 The recent fatal and tragically unnecessary shootings of Alton Sterling and Philando Castile (both black men) by law enforcement within the brief span of just two days sparked demonstrations across the country.

But an otherwise peaceful Black Lives Matter protest against police brutality in downtown Dallas, TX on the evening of Thursday, July 7 took a deadly turn when a sniper(s) opened fire on the crowd, targeting police officers who were on hand to protect the protesters.

Five officers lost their lives and seven others were wounded. Two civilians were injured as well. This marks the deadliest day ever for Dallas Law Enforcement and the deadliest single attack on police officers since 9/11.

As law official continue their investigation, details regarding the horrific massacre continue to emerge.

Here’s everything you should know about the Dallas police shooting:

Micah X. Johnson was involved with several pro-black and police watchdog groups, according to TMZ.

Johnson’s Facebook page also revealed ties to a group called The Black Matrix whose mission appears to be to challenge a system that “white societal elites” have constructed to “control the perceptions of its Black populations.”

Three additional suspects — two men and one woman — were arrested. The police have not stated for the record that these four individuals were the only persons involved in the attack.

Dallas PD Chief Brown stated that while the gunman claimed to have acted alone, “we’re not satisfied that we’ve exhausted every lead.”

According to the New York Times, initially it appeared that the shooting was a coordinated ambush, but a senior law enforcement official later said Johnson had been identified as the only shooter.

Brown said, “through our investigation of some of the suspects, it’s revealed to us that this was a well-planned, well thought out, evil tragedy by these suspects. And we won’t rest until we bring everyone to justice.”

Around 11:50 pm Thursday night, the Dallas police tweeted a photo of a man, Mark Hughes, they believed to be a suspect. It turns out Hughes was simply exercising his Second Amendment rights by openly carrying a gun at the scene. Hughes surrendered his weapon once the shooting began.

Before authorities killed the gunman with a bomb, the suspect reportedly told negotiators that more cops were going to get hurt and that bombs had been planted throughout downtown Dallas.

After conducting primary and secondary sweeps of the area, police said Friday morning they found no explosives.

Police advised residents who work in the downtown area to stay home, and the city was on lockdown.

After hours of negotiations with Johnson failed, Brown told reporters his department used a robot to deliver a bomb that killed the suspect. It was the only way to guarantee the safety of his officers. Brown said they saw no other option.

Robotics expert Peter W. Singer says that to his knowledge, this is the first time a robot has been used lethally by police.

5There Were No Reports of Hostility Between Dallas PD and Protesters

During the protest, Dallas PD chronicled events via Twitter, and while the mood was somber, police were on hand to maintain order and even posed for pictures with attendees.

Reportedly, “Many of the demonstrators could be seen in the typical Black Lives Matter pose dubbed ‘Hands Up, Don’t Shoot’ as they marched.”

6The 5 Slain Officers Have Been Identified

CNN reports that Dallas Police Officer Patrick Zamarripa was one of the five police officers killed in the ambush in Dallas, according to social media posts from family members and reports from local media outlets. Zamarripa was a U.S. Navy veteran and father of two. Dallas Area Rapid Transit officer Brent Thompson was the first officer killed in that agency’s line of duty. Thompson, 43, was a newlywed (his spouse is also a transit officer) and a nearly seven-year veteran of the transit force.

“Brent was a great officer,” said James Spiller, police chief of DART. “He was an outstanding patrol officer as well as a rail officer. We have the highest respect for him,” Spiller told CNN. Michael Krol, 40, was a former Wayne County sheriff’s deputy (2003-2007), according to Sheriff Benny Napoleon. Krol was a former resident of Redford Township in Michigan.

“We are saddened by the loss of the dedicated officers in Dallas — one of whom was a former member of this agency — and also the wounding of the other officers,” Napoleon said in a statement.  “Those officers made the ultimate sacrifice and died honoring their oaths to protect and serve. Our thoughts and prayers go out to their families and also the Dallas Police Department.” According to Dallas’ WFAA-TV, Police Sgt. Michael Smith, 55, was a native of Port Arthur, Texas. After graduating high school, Smith joined the Army and became a Ranger. Following his stint in the military, Smith graduated from the Lamar Institute of Technology in 1989 and eventually joined the Dallas Police Dept. where he served for 14 years. He leaves behind a wife and two young daughters. Lorne Ahrens was a 6-foot-5, 300-pound, former semi-pro football player, according to this Washington Post report.  “He was a big ol’ boy,” Ahren’s father-in-law Charlie Buckingham told reporters. “Big as he is, just walking down the street he cut a real figure. I’m sure it helped him in his work.”

Thousands of mourners attended a prayer vigil Friday afternoon for the five officers killed in Thursday night’s shooting. Speaking to the massive crowd at Dallas’ Thanksgiving Square, Mayor Mike Rawlings acknowledged that racial tensions continue to divide the nation and called for unity in the city.

Meanwhile, people have been placing flowers on top of two police cars stationed as a makeshift memorial outside the headquarters of the Dallas Police Department and offering their condolences to nearby police officers.

Right after the downtown Dallas vigil, grieving police officers get hugs from the community. #PrayForDallas pic.twitter.com/FyxO1HIXpm