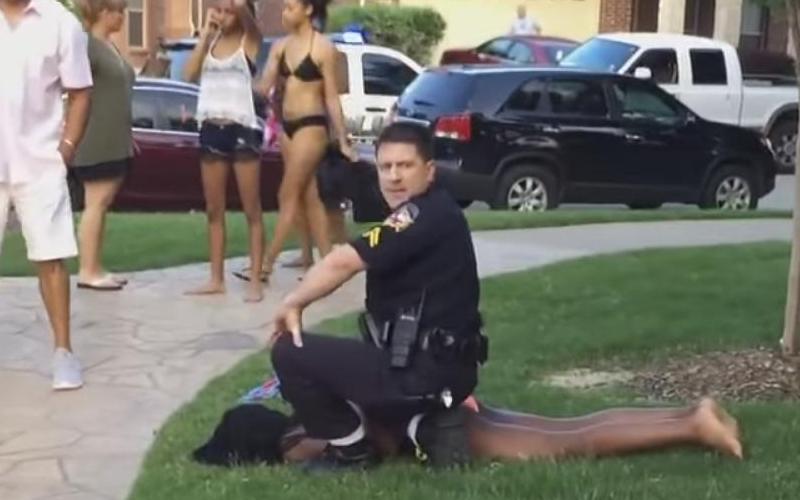 Grand juries across the country continue to uphold the belief that police officers can treat people however they want and not face any consequences. A Texas grand jury declined to indict a police officer that was caught on video manhandling and teenage girl during pool party last year.

Eric Casebolt was seen tussling with a 15-year-old black girl, forcibly pulling her to the ground by her arm and holding her down by the head. He ultimately kept her down on the ground by placing his knees on her back for several minutes. He even pulled his gun out when other teens tried to come to the girl’s aid.

Despite the video, the grand jury somehow concluded there was not enough evidence to press criminal charges. The girl’s family stated they will seek to seek to sue Casebolt after the grand jury’s decision was announced.

The June 2015 incident occurred in a gated community in McKinney, Texas during a private end of the school year pool party. According to the McKinney Police Department Facebook page, police were called about a “disturbance involving multiple juveniles at the location, who do not live in the area or have permission to be there, refusing to leave.” They were also told attendees were “actively fighting,” and 12 officers arrived on the scene.

A bystander stated some adults were making racist remarks to the teens that had heard about the party on social media and were hopping the fence to attend. Reportedly, a white adult then got into an argument with a white teen that defended their peers.

“I think a bunch of white parents were angry that a bunch of black kids who don’t live in the neighborhood were in the pool,” said Brandon Brooks, the person that posted the viral video online.

The police department found the video concerning and placed Casebolt on leave, pending an investigation. He resigned four days after the incident.

Anyone who viewed the 7-minute clip should be outraged at Casebolt’s actions. From the very beginning, he acted as if he was in a Hollywood action flick, even doing a random barrel roll. He used unnecessary force on the teenage black girl and it’s unbelievable the grand jury didn’t see anything wrong.

Unfortunately, this is just another example of police officers being above the law, instead of enforcing it. Kim T. Cole, the lawyer of the teenager Casebolt held on the ground, echoed this sentiment.

“We currently live in a time in which the public servants who are hired to protect and serve are not required to uphold the very law they are sworn to enforce.”

However, hope is not completely lost. The McKinney Police Department plans to hold a forum next week that seeks to improve the department’s relationship with the community. Let’s hope it helps, or more importantly, teaches officers to be held accountable for their actions.