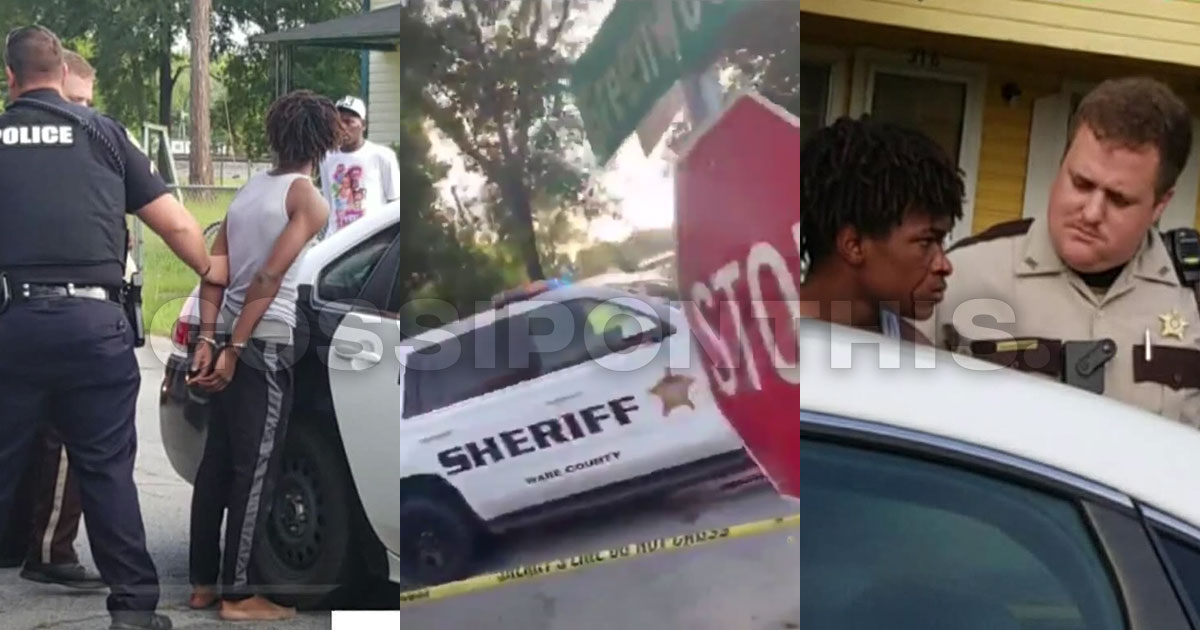 The Waycross Police Department in Ware County, Georgia is under fire after allegedly shooting at a group of unarmed black children aged between 9 and 16, and pistol-whipping a 15-year-old Black boy Saturday morning (Aug. 8) during a traffic stop.

According to the Georgia Bureau of Investigation, the officer-involved shooting took place around 8 a.m. after police attempted to stop a vehicle for a traffic violation.

Dominique Goodman Sr. said five children—aged 9, 12, 14, 15, and 16—were inside the car on their way back home from a local Walmart when a police officer started following them.

The three youngest children told News4Jax that the officer didn’t turn his lights on to pull them over until they had pulled into their neighborhood near Walters and Greenwood streets.

The 12-year-old said the older teens were scared and told the three youngest kids (the 9, 12, and 14-year-olds) to jump out of the car and run home to get their father, but when they exited the vehicle, the cop started shooting at them.

GBI officials said when the younger children ran off, the first officer pursued them in his squad car while a second officer who responded to assist approached the car with the 15 and 16-year-olds from the front.

The 9-year-old told News4Jax that at least seven shots were fired and he was almost hit by a bullet that whizzed by his head.

“It went past my face,” the boy said. “I could have gotten shot in my face, but they shot the swing.”

GBI said the older teens (the 15 and 16-year-olds, both males) jumped out of the car while it was still in drive.

The vehicle eventually came to a stop further up the road, and an altercation ensued between the second officer and the 15-year-old male, who was soon handcuffed and taken into custody. EMS later arrived and treated the 15-year-old for minor injuries.

In viral video footage posted via Facebook Live, Goodman Sr.—the children’s father—said his son (the 15-year-old) was pistol-whipped by police and showed the boy with blood running down his face while he sat in the back of a squad car.

Goodman said he heard the gunshots, which sounded close, and he stopped outside to find his children running towards the house screaming for help with the police trailing not too far behind.

“We go in the back, we open the door, we see my 9-year-old, my 12-year-old and a 14-year-old running from the police behind them with gunshots coming behind them,” Goodman said. “We go down the street and we see our 15-year-old and our 16-year-old on the ground.”

The 15 and 16-year-olds were both eventually taken from the scene in handcuffs and were held at the police station for several hours, the family said. The three minors weren’t taken into custody and were able to go home, police said.

News4Jax reporters observed multiple bullet holes in the car the children had been riding in. Fortunately, no one was seriously injured during the incident.

Goodman said the kids were coming home to get him so they could all go to a football tournament in Jacksonville that two of the children were supposed to play in on Saturday.

He said instead of being able to go to the game, his kids were traumatized by gunfire at the hands of police.

“This is a good neighborhood. All the neighbors are basically kin,” Goodman said.

In addition to the Waycross Police Department and GBI, the Georgia NAACP is also investigating the incident.

Waycross NAACP President Larry Lockey said he met with the family, and the community is demanding a thorough investigation.