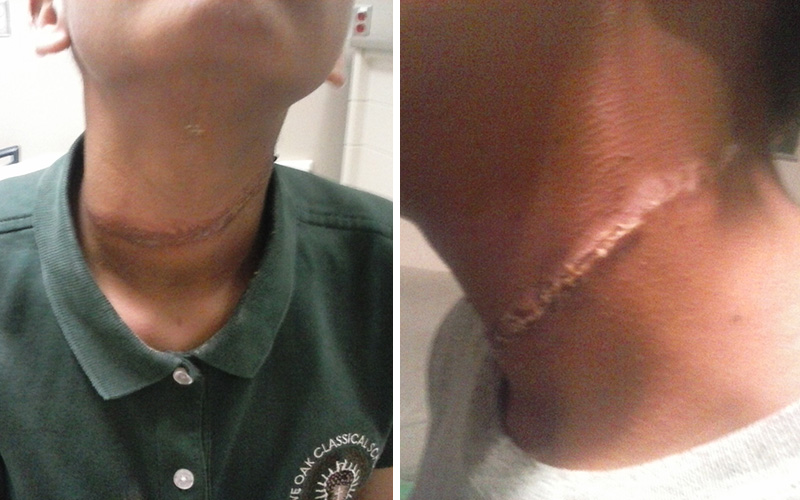 A predominantly White private school in Waco, Texas is being sued by the parents of a 12-year-old Black girl, who suffered brutal injuries during an overnight field trip.

The $3 million lawsuit is filed against Live Oak Classical School and the owner of the ranch where the incident occurred.

According to the lawsuit, three white male students allegedly put a rope around the girl’s neck and pulled her to the ground, causing severe rope burn all over her throat.

[Editor’s Note: The girl’s name is obviously being withheld for privacy concerns, and she is referred to in this Daily Beast article as “KP.”]

The family’s lawyer Levi McCathern says the attack was “racially motivated” and that the school had been contacted by the girl’s mother about bullying in the past, but never appropriately handled the situation.

“Based on the injuries KP sustained, it’s nearly impossible to argue that this was somehow an accident that could’ve happened to any child that day, regardless of race. The severity and the specificity of the injury certainly point to this incident being racial,” McCathern said.

McCathern also said the school failed to notify the child’s mother of her injuries or give the child proper medical attention.

“Even if this incident was unintentional, the school’s lack of supervision to let this happen, dismissive and tone deaf response after it happened, and refusal to investigate until legally prompted to, showed an utter disregard for one of the only African American children in the school.”

Live Oak Classical School has released a statement saying the incident at the ranch was “accidental” and that proper protocol was followed.

“The lawyer claimed that the student’s injuries were [the result of a] racially motivated, intentional attack. Live Oak takes this accusation seriously. The school interviewed all student eyewitnesses and teachers who were present and each independently established that the accusation made by the attorney is absolutely false. The injuries were caused accidentally while the students were playing with the swing and attached pull rope. The attorney was advised of the results of the interviews.”

More details below via The Daily Beast:

The $3-million lawsuit accuses Live Oak Classical School in Waco of negligence, gross negligence, and intentional infliction of emotional distress. The lead attorney on the case is Levi McCathern, who represents the Dallas Cowboys.

According to the lawsuit, KP’s mother chose Live Oak—a largely white private school with a pricey tuition rate—and applied for scholarship grants so that her daughter could attend an institution with a “better education” and a “wholesome learning environment.”

In the next year though, the lawsuit claims KP encountered bullying at the school that was not disciplined.

An email from KP’s mom in the lawsuit from November alleges that a boy repeatedly pushed and shoved her 12-year-old daughter.

“This is not the first time this has happened,” she wrote to the principal. “During the the Tempest play rehearsal he was pushing and kicking her in the line that they were in.”

According to exhibits submitted with the lawsuit, the school’s principal, Allison Buras, wrote back to the mother that she “would never want children hurting one another” and that she spoke to the boys about the alleged incident.

“It sounds like he may have pushed on the back of her leg to make her leg buckle, which is something the kids sometimes do,” Buras wrote. “Rarely is that done out of meanness but more out of a desire for sport.”

Attorney David Deaconson, who represents Live Oak, said Tuesday said that the allegations about bullying made in McCathern’s petition are not accurate.

But the main complaint against the school comes from an April field trip to Germer Ranch in Blanco County, Texas. KP and several other children were said to have come across a swing with long rope was attached so children could pull it, the lawsuit states.

The lawsuit states KP was standing to the side of the swing when three white males, including one who allegedly bullied her in the past, pulled the rope back and wrapped it around her neck. The boys then violently jerked KP to the ground, the family claims, leaving abrasions on her neck.

Jeremy Counseller, a board member for the school, told the Dallas Morning News that “Live Oak takes the safety of its students seriously and is saddened that one of its family suffered an unfortunate accident and injury.” Counseller described what happened as “accident.”

Deaconson, the school’s counsel, said it was “proactive” afterward and conducted interviews with “students, chaperones and teachers who attended the field trip in order to gather information about the accident with the swing.” Deaconson said that the school’s internal investigation indicated that “the injuries suffered by the student were the result of an accident.”

“Anyone can allege anything they want to in a petition, but that doesn’t make it fact,” he told the Waco Tribune-Herald.

McCathern, the family’s attorney, called the alleged attack “racially motivated” in a statement.

“Based on the injuries KP sustained, it’s nearly impossible to argue that this was somehow an accident that could of happened to any child that day, regardless of race,” he said. “The severity and the specificity of the injury certainly point to this incident being racial.”

When KP told adult chaperones what happened, she was allegedly given Vaseline for her neck and Motrin for the pain. None of the adults informed KP’s mother afterward or when they returned the kids to the school to be picked up from the trip, the lawsuit claims.

“Even if this incident was unintentional,” McCathern wrote, “the school’s lack of supervision to let this happen, dismissive and tone deaf response after it happened, and refusal to investigate until legally prompted to, showed an utter disregard for one of the only African American children in the school.”

“Live Oak Classical School continues to stand behind the facts of this case and will not participate in the spreading of untruths and misinformation about its students or the school,” Deaconson wrote in a statement, adding that “the family hired a lawyer who threatened the school with racial allegations less than four days (including a weekend) after the field trip.”

When KP got into the family vehicle, the lawsuit said her mother saw the injury and was “shocked.” The girl was taken to the emergency room.

Doctors at the hospital commented on the severity of the injury and then notified police, the lawsuit alleges. A crime scene unit took photos for an investigation.

Blanco County Sheriff’s Office Capt. Ben Ablon told The Daily Beast that he has begun interviews, obtained initial police reports and requested hospital records in the case. Ablon said he’ll interview every person who was on the trip, including students and chaperones.

“We are still actively working this case,” he said. “It’s going to take a while.”

Ablon has also requested the help of a pediatrician with a specialty in child abuse injuries to review the evidence and scans that were taken during KP’s hospital visit.

KP, then 12, was immediately removed from the school, said attorney Mark “TJ” Woods, who works at McCathern’s firm. She’s now receiving treatment and counseling for the injuries she sustained, he said.

Deaconson said the school has also evaluated its parental notification protocol and “is making changes to insure parents are notified of any injuries on field trips in the future.”