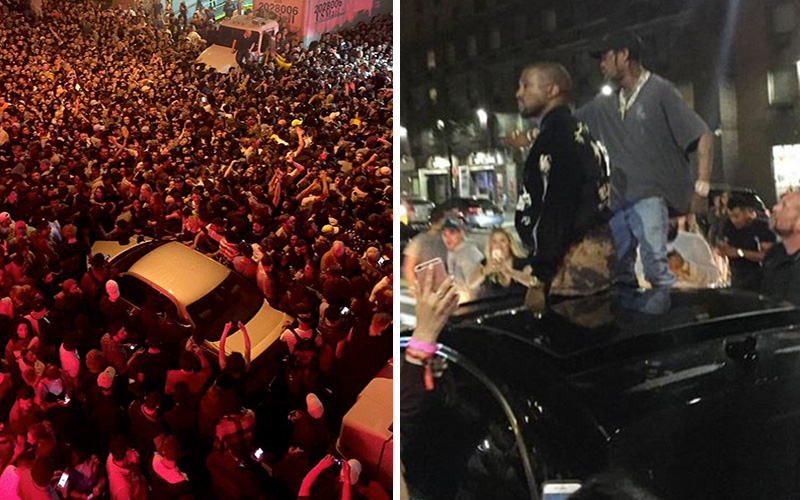 For any haters who may think Kanye West’s sense of self-worth is a tad overinflated and possibly undeserved, boy, have we got news for you.

After the singer’s headlining performance at the Governor’s Ball was cancelled (the three-day lineup was scrapped due to inclement weather), Kanye was rumored to be performing a “secret” show early Monday morning (Jun 6) at Webster Hall in New York City’s East Village.

Throngs of people (roughly 4,000) descended upon the venue around 1 a.m., creating what one observer called “near-riot” conditions. No violence was reported, just a lot of enthusiastic music fans flocking the streets, standing on top of cars and chanting “Pablo,” “Kanye,” “F*ck the Governors Ball,” and a few “F*ck Donald Trumps” thrown in for good measure.

The line for the alleged @KanyeWest show at Webster Hall pic.twitter.com/KFygTwlBLW

The concert appeared to be news to the proprietors of the proposed venue, and revelers hopes were dashed at 1:45 a.m. when the official Webster Hall Twitter account announced there was no concert in the works.

There is no late show at Webster Hall tonight. Please get home safely.

Here is a video of the announcement. pic.twitter.com/lRJxxpXRea

Just an hour earlier, Kanye tweeted his show was sold out but failed to give details regarding the venue.

Fans had no reason to doubt Kanye’s promise of a pop-up performance. Kanye thrilled attendees when he made an unscheduled performance along with several artists signed to his G.O.O.D. music label during Hot 97’s summer jam.

Kanye and Kim Kardashian were spotted in the East Village, and Kardashian live-streamed footage of her husband making calls to try and find another venue, according to Billboard Magazine. Kanye also deigned to wave to a few of his loyal subjects from the sunroof of his car.

No hard feelings Kanye, you gave it a shot.