GOSSIPONTHIS.COM Pop Culture #JusticeForHarambe: Social Media is Going Apeshit Over the Shooting Death of a... 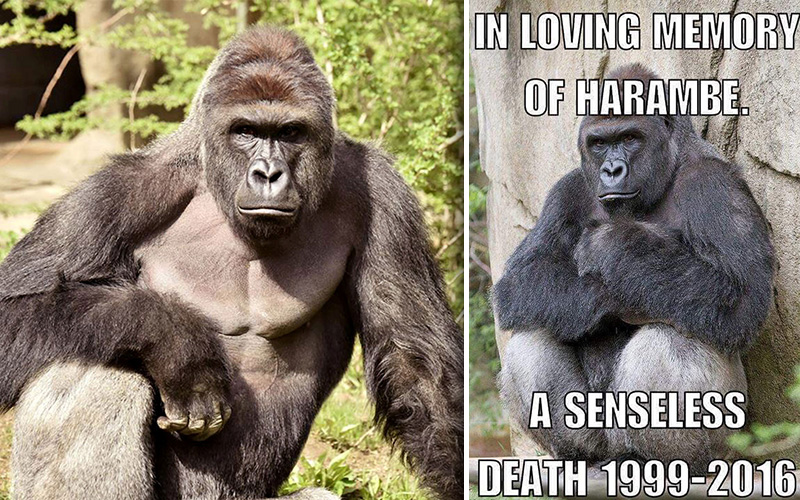 This week, a gorilla at the Cincinnati Zoo was killed after a child fell into his enclosure. If you listen carefully, you can still hear the clicking of social justice warriors around the internet furiously typing their opinion.

I’m not here to make light of the situation. Well, not entirely. It’s a shame that this innocent gorilla was killed over one parent’s negligence, but the social media backlash has been astounding. Within hours, it seemed like everyone had become experts in the field of zoology and were the picture of perfect parenting.

Some blamed the zoo, saying they mishandled the situation. Apparently that one biology class in high school qualifies Facebook users to know exactly how many tranquilizers are needed to subdue an agitated silverback gorilla. And I had no idea there were so many gorilla body language readers in the world. Videos of how Harambe was “protecting” the child, “rescuing” him from the deeper water, even one saying he was “holding the child’s hand,” filled news feeds.

They claimed there was no need to kill Harambe the gorilla. They could have simply rescued the child from the enclosure, or, at worst, used tranquilizers on the gorilla. They condemned the zoo for taking action, some even going as far as saying the gorilla should have been spared, even if it meant at the expense of the child.

Harambe seemed like he was playing with the little boy. If he wanted to kill the boy he would've.

#Harambe His natural instinct kicked in to protect a 4 year old boy. Did not deserve to die?? pic.twitter.com/XWMguOE9BF

I am pissed off! They killed #Harambe at #CincinnatiZoo. He was a gentle gorilla & was only trying to save the boy pic.twitter.com/FFjg67lfQu

I truly hope the boy's parents are prosecuted for child endangerment and the @CincinnatiZoo sues for the loss of their beloved Harambe.

This is sad & disgusting. I want justice for Harambe who was only being protective. #ripharambe #justiceforharambe pic.twitter.com/ed3S7uwg6n

Others blamed the parents, wondering how such negligence could exist in this world. Because really, what poor excuse for a parent loses their child in a crowded area? Apparently that doesn’t happen to anyone on Twitter. And sure, I’ll admit they probably shouldn’t win the parent of the year award, but do they really deserve death threats? So killing a gorilla is wrong, but threatening to kill two people who accidently had a hand in its death isn’t?

I can’t help but be reminded of Cecil the Lion. We all remember that story, right? Beloved lion is killed by a hunter, and suddenly, Dr. Walter J. Palmer, DDS, is public enemy number one. The online backlash forced him to close down his business for a while, but what else did it do? How many people still care?

There’s nothing wrong with being passionate about something and fighting to make a difference. Some may mock Green Peace activists hanging from a bridge to block oil tankers, but at least they’re actually doing something. This sense of being a good citizen and fighting the good fight all from the comfort of your own home, behind an anonymous screen and keyboard, has gone too far.

And I’m left wondering why people pick the fights they do. Why was the outrage over Harambe or Cecil so loud, so furious, and yet other issues go unheard of? While the internet waged war over the death of a gorilla in a zoo, a third of the coral in the barrier reef is dead or dying off.

Syrian migrants, a large number of which are children, are in the hands of smugglers whose only goal is to make a quick buck, regardless of the refugees’ well being. Right now, a teenage girl in Brazil fights for justice after being raped by a mob of men. In Chicago, there were almost 400 shooting victims (of them, 66 deaths) in the month of May alone.

Where’s the outcry over any of these, or countless other, crises around the world? Where are the experts on how to save our coral reef or the death threats for that group of rapists in Brazil? Where is the extensive media coverage about the shootings in Chicago?

Just as there’s nothing wrong with advocating for change amongst the injustices in the world, there’s also no shame in admitting you’re simply trying to get by. Make some money, support yourself, chase your dreams. That is a noble pursuit in its own right.

But please, for the love of all that is good in the world, can we please stop this feigned outrage over issues that, in the end, don’t really matter? Can we please quit our baseless and useless social justice warrioring and just go back to watching cat videos on the Internet?