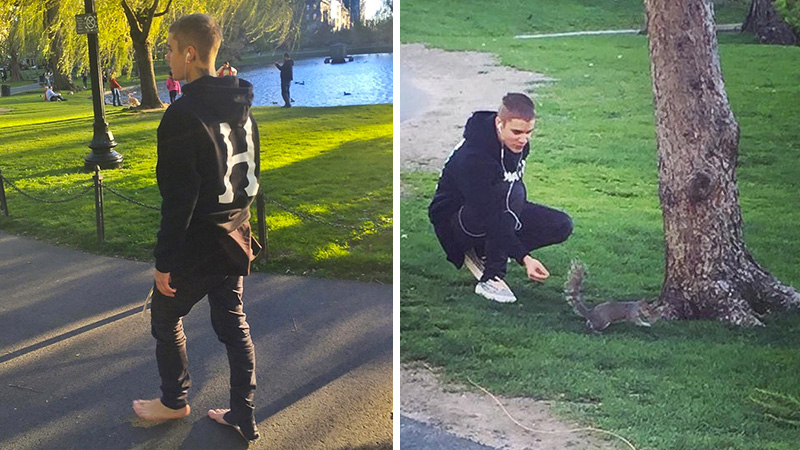 Y’all, can we call an emergency intervention to save Justin Bieber before he goes Britney-2009 crazy and shaves his head in a gas station and lunges at paparazzi with a broken umbrella?

It’s no secret that Justin Bieber has been through some emotional struggles. First, there was all of the acting out that he did, like when he went around pissing in public. But that just seemed like bad boy behavior, you know giving us a little white Bobby Brown.

But lately, it seems like Justin has become SERIOUSLY disenchanted with this whole fame thing. He’s snapped on his fans more than once. Remember that time when he rudely told his fans that if they were gonna clap, they needed to at least be on beat?

That was just the beginning though.

The latest cry for help? Bieber has been running around in a park in Boston barefoot, playing with squirrels and searching for the meaning of life. Now here’s the thing: I’m not one to say that being a celebrity is easy. But there are many who handle it with far more grace than Bieber currently is.

If Justin feels like he’s reaching the breaking point for him mentally, he might want to tap out of the game for a minute if that will help him get his mind right. Or, he might need to step away from the spotlight for good if he can’t hang with the fame game.

The last thing we need is for Justin Bieber to turn into the white, pop version of Lauryn Hill who shows up 2 and half hours late to shows and goes on crazy rants when he finally does show up.

Frankly, he was already on track to become the Lauryn Hill with those frightening white boy dreads he had in his head. So let’s just cut this off before it all gets way too out of hand, shall we?