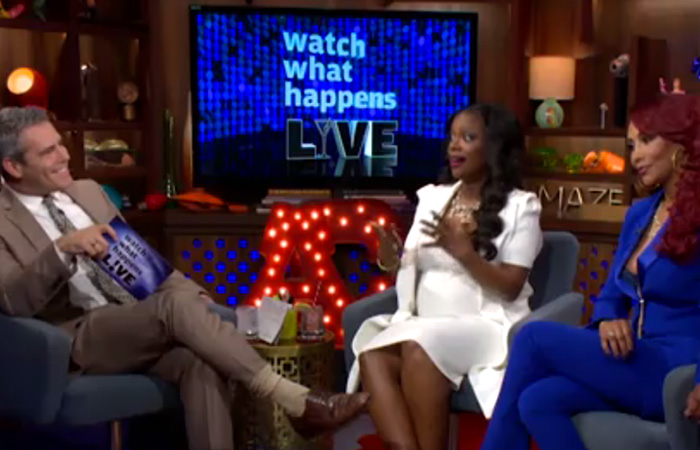 Vivica A. Fox set Twitter ablaze last night during her appearance on Bravo’s Watch What Happens Live after she implied that 50 Cent was a “booty snatcher” (i.e. gay) during the live broadcast.

In case you don’t remember, Fox and Cent dated waaaaaay back in 2003 (more than 10 years ago, before celebrity blogging was even a “thing”).

That same year, they had a very nasty break-up, in which they both trashed each other’s names in the media, with the rapper branding the actress as a “stalker” and Viv firing back basically saying she’s been in this game way too long to be dealing with 50’s childish antics.

Several years later (2009 to be exact) it seemed as if the former couple had made up after 50 asked Vivica to star as the leading lady in his “Do You Think About Me?” video and she obliged.

Fast forward to 2015 and now they’re apparently back on bad terms, because Vivica made a HUGE accusation about 50 on live television.

Near the end of her appearance on Watch What Happens Live (alongside RHOA star Kandi Burruss), while discussing her role on Empire as Cookie Lyon’s sister, Fox insinuated that 50 Cent is a closeted homosexual.

This is how it went down (via Jezebel):

ANDY: What were your thoughts when 50 Cent blamed the second season ratings dip on “gay stuff”?

VIVICA: First of all, you know, um, pot calling kettle black is all I’m saying.

KANDI BURRUSS: That was some tea! That was major shade!

ANDY: You’re not insinuating that 50 cent is…

Vivica then pursed her lips and silently flipped her hair back. But this didn’t satisfy Andy (or Kandi), so he continued questioning her.

ANDY: Wait, Vivica A. Fox, what are you insinuating.

VIVICA: Well, I mean, no, he’s not, I mean, we had a good time, I mean, but he’s just, seems, like he’s got something that’s not quite clear.

ANDY: You mean sometimes if people protest too much about something, that the actual fire is happening right there in front of them?

VIVICA: Yes. Absolutely. I’ll just never forget there was a Vibe cover with him and Soulja Boy that made me go, “Hmm.”…He looked like a booty snatcher on that one to me.

This is the homoerotic magazine cover (XXL, not Vibe, but close…) Vivica was referring to: