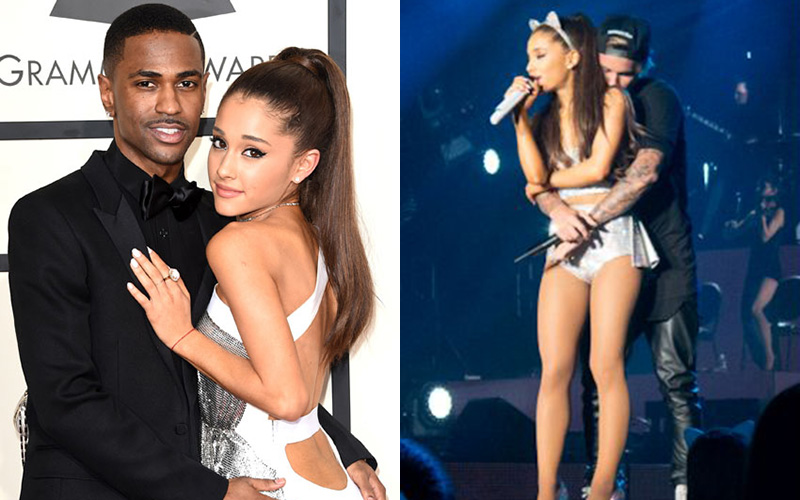 Justin Bieber hugging all up on Ariana Grande may have been the final straw in the “Love Me Harder” singer’s relationship with Big Sean.

Sources close to the couple tell TMZ Ariana and Sean had been on the rocks since February, but were trying to work things out up until the video of her and Justin came out.

Big Sean feels like Ariana tried to “hurt him” by allowing Justin to touch her.

…the crowning blow was just after the breakup. They were still talking and the door was slightly open for a reconciliation, when Bieber jumped onstage in L.A. and grabbed Ariana from behind. Even though Ariana pushed Biebs away, Sean believes it was all calculated — NOT by Bieber but Ariana — to hurt him.

Sources also say Big Sean claims to have called things off because he saw Ariana as “selfish” and “immature.”

Sources say the downfall of their relationship started in February, when he made the most important appearance of his career at the House of Blues in West Hollywood. Everyone showed — Kanye, Bieber, JLo, Chris Brown, Jay Z, A$AP Rocky, Tyga, Kylie and Kendall — everyone EXCEPT ARIANA. We’re told she needed to get ready for the Grammy’s the next day, which he found extremely selfish

Sean also traveled to see her “10 times more” than she went to see him. He claimed once she demanded that he blow tens of thousands of dollars to take a private jet to see her. Sean, who grew up poor, felt she was a spendthrift … a sign of immaturity.

Is it just us or does Big Sean sound a tad bit too needy? She does have a career of her own, bruh.