GOSSIPONTHIS.COM Pop Culture “What Color Is This Dress?”: The Great Debate That Divided The Internet 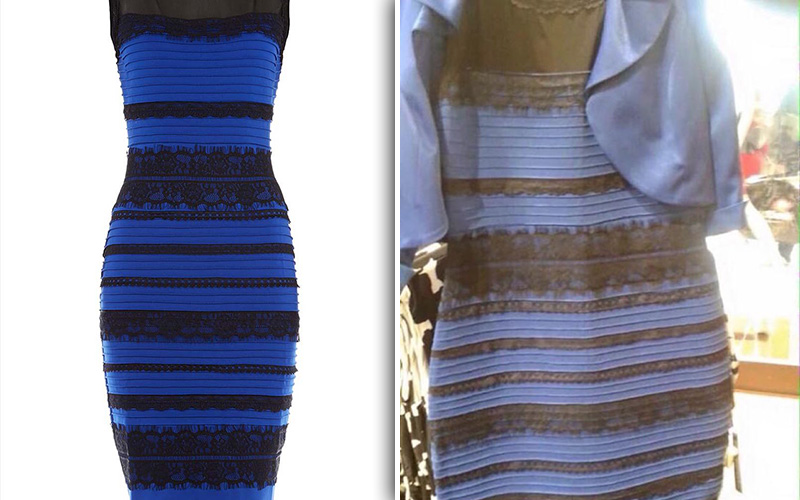 If you are alive and breathing today (and haven’t been living under a rock for the past week or so), you’ve  certainly heard about the debate concerning the color of a dress that almost broke the Internet this past weekend.

It all started last Wednesday (Feb 25) when a 21-year-old woman named Caitlin McCall posted a photo of a dress on Tumblr worn by someone at a wedding she recently attended.

McCall was curious as to what color folks saw in the image because she and her friends couldn’t agree on it. Some saw white and gold and others saw blue and black.

guys please help me — is this dress white and gold, or blue and black? Me and my friends can’t agree and we are freaking the f**k out

And that’s how the Internet started being divided right down the middle. On one side you have the “I see blue and black” people, and on the other are the folks saying “I see white and gold.” It’s been nearly a week and people still can’t agree on the color.

Households were divided. Relationships were tested. Memes were created. The intelligence of certain celebrities was questioned. Within days, “What color is this dress?” seemed to be the most asked question in the world, as the debate spilled outside of the Internet.

Here’s the deal. The ACTUAL dress IS black and blue.

But the image shows a dress that appears to be white and gold. The dress is not white and gold, but to some people (including the writer of this article), it sure does look like it.

“I see white and gold in that picture, but I was there at the wedding and it was blue and black,” Caitlin McCall — the woman who singlehandedly caused the biggest social media debate in Internet history — told Toronto radio station Kiss 92.5 in an interview.

Solved. Here’s the mother of the bride that posted the damn dress, cover up included. Done with the #GreatDressDebate pic.twitter.com/wfrTrB6ZiS

McCall said she doesn’t understand why people are seeing different colors, and she was surprised at how the photo went so viral so fast.

“I managed to keep tabs on it for a couple of hours when it first started going a bit crazy, but after that I just kind of completely lost track, so I just keep checking in every now and again and seeing if we’re still trending,” she said. “It was absolutely insane. I mean, I still feel like I’m in a bit of a dream.”

Meanwhile, Wired.com was one of the first to discover the science behind why no one can agree on the color of #TheDress:

Light enters the eye through the lens—different wavelengths corresponding to different colors. The light hits the retina in the back of the eye where pigments fire up neural connections to the visual cortex, the part of the brain that processes those signals into an image.

Critically, though, that first burst of light is made of whatever wavelengths are illuminating the world, reflecting off whatever you’re looking at. Without you having to worry about it, your brain figures out what color light is bouncing off the thing your eyes are looking at, and essentially subtracts that color from the “real” color of the object.

“Our visual system is supposed to throw away information about the illuminant and extract information about the actual reflectance,” says Jay Neitz, a neuroscientist at the University of Washington. “But I’ve studied individual differences in color vision for 30 years, and this is one of the biggest individual differences I’ve ever seen.” (Neitz sees white-and-gold.)

Usually that system works just fine. This image, though, hits some kind of perceptual boundary. That might be because of how people are wired. Human beings evolved to see in daylight, but daylight changes color. That chromatic axis varies from the pinkish red of dawn, up through the blue-white of noontime, and then back down to reddish twilight.

But, for the record: THE DAMN DRESS IS BLUE AND BLACK.