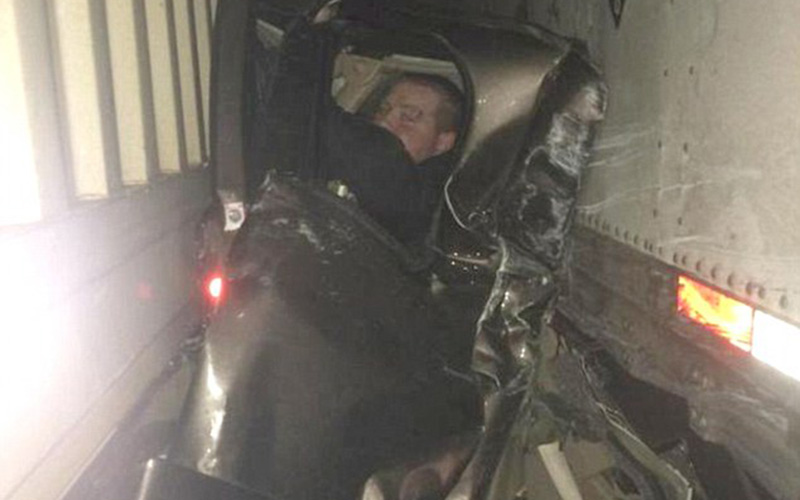 A Washington man driving through Oregon made headlines over the weekend after he miraculously survived being trapped between two semi trucks on the highway, and now he’s proudly sharing his story of survival.

27-year-old Kaleb Whitby was pictured after the accident Saturday (Jan 17) and can be seen in his crushed Chevy Silverado pickup wedged between two semi trucks on I-84 in Oregeon.

The photo quickly went viral because of its harrowing nature and the fact that Whitby walked away with no serious injuries: a bruise on his left eyebrow and a few scratches on his right hand.

“I’ve got two Band-Aids on my right ring finger,” he said. “And a little bit of ice on my left eye.” Whitby said he was on his way home in Washington to Council, Idaho for business when he came across dense fog on I-84 and couldn’t stop due to the icy roads, which caused him to slam into a semi truck. Not too long after, another semi truck slammed into the back of his vehicle.

“He hit it with such force that it ended up swinging back end of my pickup underneath that truck I hit,” said Whitby. “When I finally came to a stop I just remember all the crunching and all of a sudden just the stop, it was just done.”

“I was so close to both trucks that I could touch them at the same time,” he told People. “It was pretty unreal.” According to The Oregonian, more than 100 others were involved in the pileup, and at least three separate collisions involving more than 20 vehicles, most of them semi trucks, injured a dozen or so people.

Whitby told CNN’s “New Day” he’s a man of faith and he thanked God for his survival.

“I do believe, and I’m very firm in that, and I just held on to the wheel as tight as I could, tucked my head and just kept praying the whole time. After he hit, I just hoped that it would be over with soon,” he said.

He added, “I don’t have the answers, and if I did, I probably wouldn’t be doing what I’m doing now. When things like that happen, and what I’ve kinda come to realize, is that it is a miracle and that I need to take that into my life and remember it, and now I need to figure out who I need to be in this life and what I need to accomplish … Because how many people don’t get the chance — a second chance — at escaping a situation like that?”