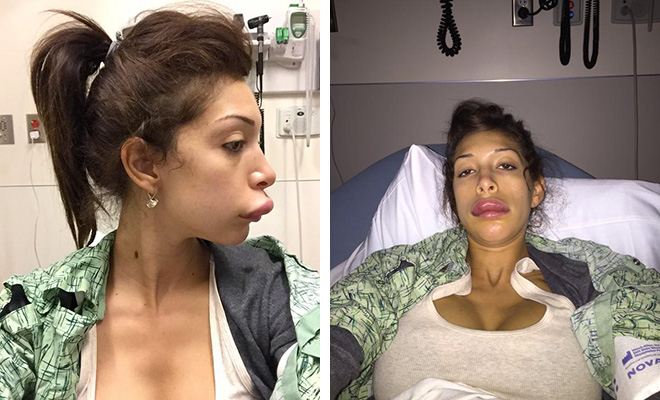 According to TMZ, Farrah was on the unfortunate receiving end of what could very well be the absolute WORST lip injections in medical history!

And the fact that she looks a hot ass muh-fuggin mess didn’t stop her from sharing photos of the botched botox injection procedure for all to see.

Farrah also tweeted a side-by-side comparison of herself with Turanga Leela from “Futurama,” which actually is a pretty damn spot on comparison, especially coming from the source. “Gotta love my new look,” she wrote.

We’re told Farrah was getting a new procedure, where the doctor puts an implant in the patients lip … which in theory is cost effective because you don’t have to maintain the work with fillers.

Farrah says she researched the doctor and the procedure and decided it was a safe bet. She was wrong. She says the doctors injected her with an anesthetic before the procedure … and believes she had a MAJOR allergic reaction.

For those of you who have no idea who this woman is or what she used to look like before she fucked up her face beyond recognition (she’s already had plastic surgery before, btw), here’s a photo of her from 2013: