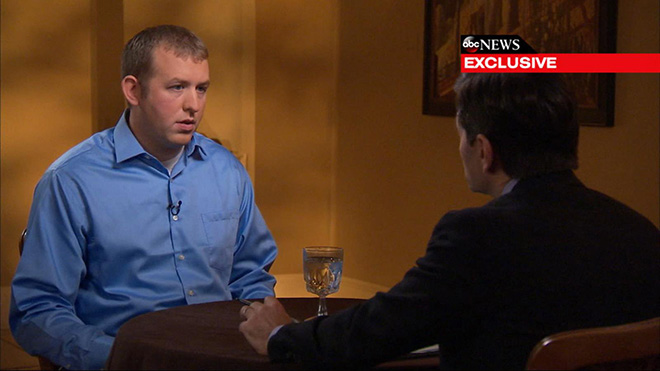 Officer Darren Wilson has been publicly silent since the day he shot and killed 18-year-old Michael Brown in Ferguson, Missouri. Even as the Missouri Grand Jury announced its decision to not indict him, Wilson remained quiet, allowing his attorneys to release a statement on his behalf.

But now that he’s escaped being charged for Mike Brown’s murder, Officer Wilson’s “moment of silence” has turned into a blaring noise, as he is now speaking out about the incident for the first time, because (in his mind) “Sure! Why not?”

Wilson sat down with ABC’s George Stephanopoulos for an interview that aired Tuesday (Nov 25) and gave his version of his short encounter with Brown on August 9th. Wilson said Brown reached into his car and tried to grab his gun, and Brown then “charged” at him, which is when he started shooting.

Wilson repeatedly defended killing Brown, saying he did exactly what he was trained to do, and race had nothing to do with it because he would have done the exact same thing if Brown what white. Later in the interview, Wilson said he had a clean conscience, though he also repeatedly said he’s “sorry” Brown is dead.

Wilson also told Stephanopolous that all he and his new wife is want a normal life.

Stephanopolous: Guess it’s hard to have a normal life after someone is lying dead. Is it something you think that will always haunt you?

Wilson: I don’t think it’s a haunting, it’s just something that happened.

Darren Wilson on the death of Michael Brown: “It’s just something that happened.”

JUST SOMETHING THAT HAPPENED?

Wow. Despicable doesn’t even begin to describe this character.