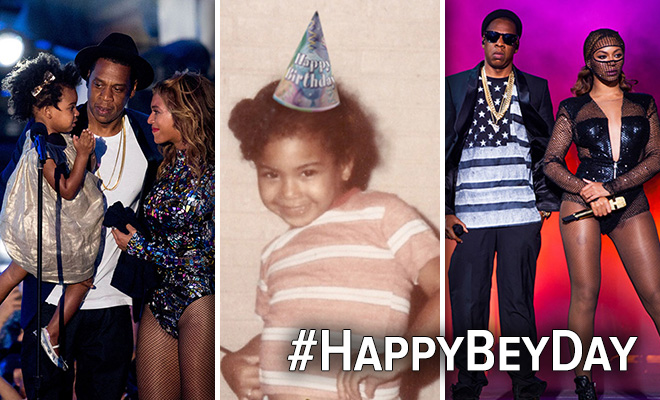 This is what Jay Z posted to his Life + Times website: And Beyoncé’s Parkwood Entertainment fam took over her official website and posted this throwback picture of Bey with a “Happy Birthday” hat photoshopped into it, as well as this short Happy B’Day note:

It’s B Day! The Parkwood Entertainment family has taken over a small slice of Beyonce.com to send a special birthday wish.

Happy Birthday, Beyoncé and may this new year of life be sweeter than them all!

Unless you’ve been living under a rock for the past year or so, you know that Beyoncé has been killing it, even more than usual!

Yoncé has always been a major force to reckon with (DID YOU SEE THAT SUPER BOWL PERFORMANCE?), and after she surprised the world with the release of her self-titled fifth album, she became an even bigger force.

Not only did the project debut at the No. 1 spot on the Billboard 200 albums chart, making it her fifth consecutive No. 1 album in North America, but it also damn near crashed iTunes, selling 828,773 digital copies in the FIRST THREE DAYS of its release. Amid the release of her surprise album, Beyoncé was touring the world for her epic “Mrs. Carter Show Tour,” which reportedly averaged over $2 million PER SHOW and included a whopping 132 shows.

With her daughter Blue Ivy tow, Mrs. Carter travelled all over the world and ended her journey in Lisbon, Portugal back in March, and at that point, you’d think she’d take a break, but nope, that’s just not what Queen Bey does. Within one month, the “Drunk In Love” singer announced she would be headed back on the road, but this time for a joint tour with her husband Jay Z called “On The Run.” In April, the “Partition” singer landed the cover of TIME magazine’s 100 Most Influential People issue, where she was also named the most influential person of the world. The issue was released the following May.

Meanwhile, Beyoncé’s “On The Run Tour” with Jay Z grossed over $100 million in ticket sales, and a special version of the show — which will be filmed over a two-night period next weekend in Paris — will air on HBO later this month on September 20th.

And on top of all that, after slaying the 2014 MTV Video Music Awards last Sunday (Aug 24) with an epic 16-minute performance medley of her digital self-titled album, Beyoncé was presented with the iconic MTV Michael Jackson Video Vanguard award by her husband and their daughter in what turned out to be one of the most adorable celebrity family moments in TV history.