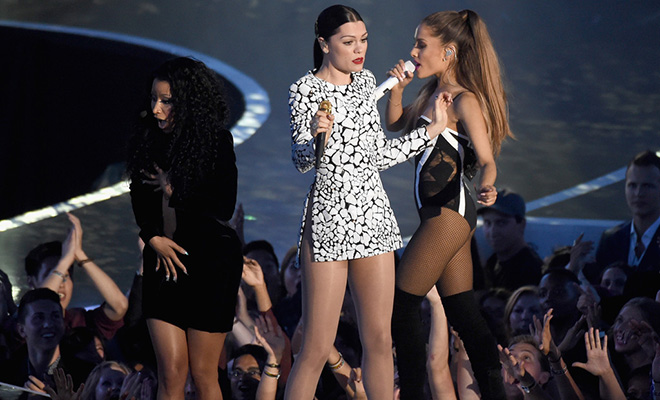 Nicki Minaj‘s surprise wardrobe malfunction during her opening performance with Jessie J and Ariana Grande Sunday night (Aug 24) at the 2014 MTV Video Music Awards was nowhere near as notable as Beyoncé’s “Flawless” mini concert, nor did it generate as many Tweets and Vine Loops as Baby Blue Ivy doing the “I woke up like this!” dance, although it did end up being one of the most talked about moments from the show.

But was it all a publicity stunt?

That’s where “Celebrity Big Brother” aka TMZ comes in.

The gossip rag reports that Nicki had the same “wardrobe malfunction” during rehearsals early Sunday morning, hours before the live show.

Eyewitnesses who watched Nicki’s rehearsal Sunday morning tell TMZ … she walked on stage wearing the same dress — unzipped. One eyewitness says it caught her eye because she initially thought Nicki had come out in a robe.

We’re told Nicki was wrapping her arms around the dress in a “weird” sort of way … trying to manipulate it to see how much would be exposed.

And we’re told … the VMAs created a make-shift dressing room right off stage — draped with black sheets — so she would have enough time to change.

Hmm. Did anyone else notice how she was the only one who had a headset mic? (Which means she had two free hands to make sure her goodies didn’t fall out all over the place.)

Joan Rivers cut right to the chase: “Okay, what happened to Nicki’s dress and was that pre-planned?”

According to the “Domino” singer, no. It was an honest wardrobe whoops. “I was like, what do I do? Do I help? Do I pull it up?” the British beauty said.

But Jessie’s take on the mistake wasn’t so negative. “I kind of liked it,” the singer/songerwriter said. “She had both hands at least.”