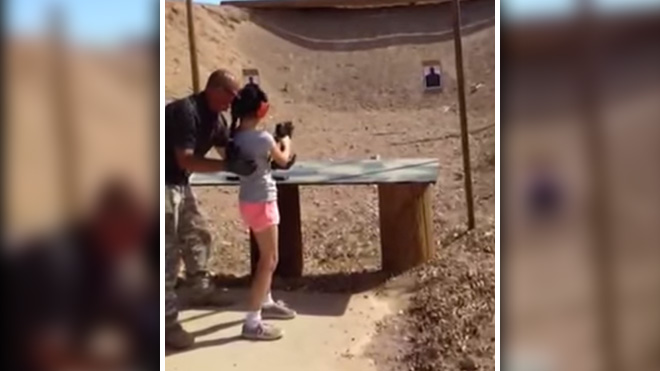 A 9 year-old girl who was being taught how to “properly” fire an automatic Uzi machine gun accidentally killed her shooting instructor … and it was all caught on video.

The little girl, whose name isn’t being released, was at the Last Stop outdoor shooting range in White Hills, Arizona with her parents Tuesday (Aug 26) when the tragic incident took place.

According to authorities, when the girl pulled the trigger, the gun’s recoil sent the weapon over her head and shot the instructor as he stood right beside her.

The instructor, 39-year-old Charles Vacca, was struck in the head and died later from his injuries at the University Medical Center in Las Vegas.

Mohave County Sheriff’s officials released the shocking video footage (above) showing Vacca just moments before the fatal shooting, which should further prove that kids should never be allowed to handle guns.