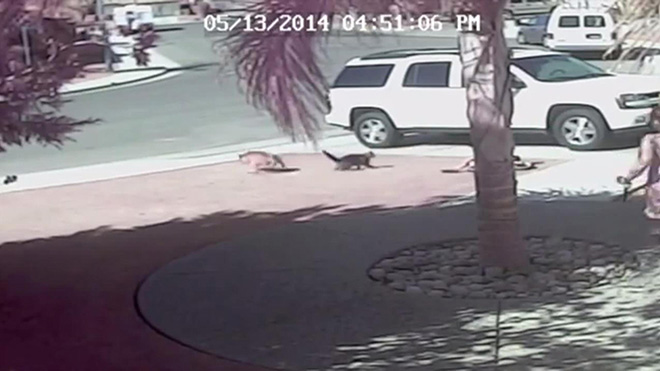 In shocking video footage that you have to see to believe, a family cat rescued a boy from being viciously attacked by a dog!

On Tuesday (May 13), a toddler was riding his bike in his family’s driveway in Bakersfield, California when he was nearly mauled by a neighbor’s dog.

But before the canine could do any serious damage, the family’s pet cat Tara came flying out of nowhere and chased the dog away. (Watch the video above)

The whole episode played out on security camera footage taken outside the home, and after the attack, the boy’s mother can be seen swooping in the pick up her injured son, carrying him away to safety.

Erica Triantafilo told local news station KERO-TV that her son needed a few stitches, but other than that, he is doing OK.

Erica and her husband Roger appeared on the Today Show and said that Tara is normally “the most mellow cat you’ve ever met,” but obviously, she can turn into an aggressive pussy when she needs to.

Gawker called the cat a “hero,” while their sister site Jezebel called the feline the “world’s most awesome cat.”

“The cat, meanwhile, is now officially the best fucking cat in the history of the goddamn world,” wrote Jezebel’s Erin Gloria Ryan. “Seriously. I’ve had cats my entire life and they’ve all been delightful assholes who would probably watch me get murdered and then beg my murderer for a can of wet food before he leaves.”

According to TMZ, the dog was picked up Tuesday by animal control “in an extremely aggressive state” and a decision had been made to put him to sleep.