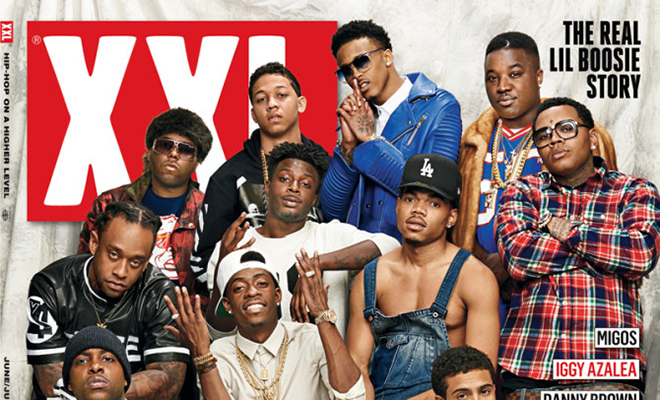 XXL magazine released their 2014 Freshman Class cover this week, showing off the top 12 hip-hop artists to look out for this year, and among the breakthrough acts featured on the June/July 2014 issue are Chance the Rapper, August Alsina, Rich Homie Quan and Ty Dolla $ign.

XXL’s editor-in-chief Vanessa Satten tells Yahoo Music that they came up with the concept in 2007 after noticing an increased interest in up-and-coming rappers. “We’d seen people’s attention shifting over to newer artists,” she explained. “They were not as into vets as they used to be.”

Satten says the Freshman Class isn’t the magazine’s top seller, but it generates a lot of buzz online with behind-the-scenes footage of the cover shoot and rap sessions. “It’s huge digitally,” she said. “That’s where you get to see the ciphers and freestyles.”

The Freshman lineup is determined by thorough research. The XXL staff interviews music business executives, managers, friends, hip-hop fans, and artists, and discusses the findings in a series of meetings. “We start in September and go through January,” Satten says. “We do as much research as we can.”

“It’s always exciting to see the Freshman [issue] do well,” Satten says. “We put Macklemore on the cover really early when people were saying the whole year, ‘Who’s a Macklemore? What’s a Macklemore?’ We were on Kendrick [Lamar] early. They used to come to our office and hang out.”

Last week, two prior freshman artists, Future and Iggy Azalea, entered the Billboard Hot 200 chart in the No. 2 and No. 3 positions. “We’re trying to predict the future,” Satten explains. “There are misses at times, but there are also hits. I think the Freshmen have been pretty on target with a lot of the big stars of today.”

Satten says there is a good reason why ASAP Rocky, Nicki Minaj, and Drake aren’t Freshman alum. “[ASAP Rocky] said at first he wanted to be on the cover, then he backed out, but it wasn’t for our lack of not knowing,” she reveals. “Same with Nicki and Drake.”

Because the cover only happens once a year, it is sometimes hard to align with the artists. “There’s a lot of time in between that somebody could blow up and be too big by the time the next cover comes out.”