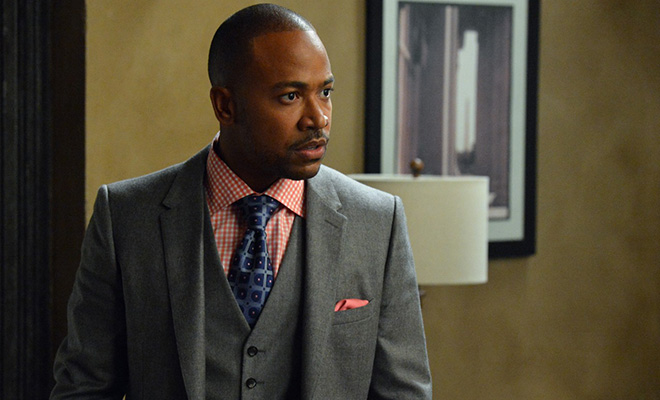 Columbus Short is not winning right now! The 31 year-old actor has officially been fired from “Scandal” over domestic violence allegations.

Earlier this month, Short’s wife filed a restraining order against him after he allegedly put a knife to her throat, chocked her out and threatened to kill her on April 7th.

In February, Short was arrested for another incident in which he was accused of attacking his wife in front of their kids. And just weeks ago, he knocked out a guy at the club after getting into a heated argument.

But the domestic violence allegations were the final straw for “Scandal” showrunner Shonda Rhimes and ABC.

Harrison Wright — Short’s character on the show — was shot in the Season 3 finale, and with the news of his firing, it is assumed that he will die from his TV wounds next season.

Columbus has also released a statement confirming that he will not be returning to the show.

“At this time I must confirm my exit from a show I’ve called home for 3 years, with what is the most talented ensemble on television today. I would like to first thank Shonda Rhimes for the opportunity to work with such an amazing cast

“Thank you GLADIATORS, who have supported me throughout my entire career and of course to ABC and Shondaland for allowing me to play such a pivotal role in the Scandal series. I have enjoyed every single minute of it.

“Everything must come to an end and unfortunately the time has come for Harrison Wright to exit the canvas. I wish nothing but the best for Shonda, Kerry and the rest of the cast, who have become like a second family to me in such a short amount of time. For this, I will forever be grateful.”

Damn not only has he lost his wife and his home … but now his job?!? Way to just f*ck everything up, Colombo!