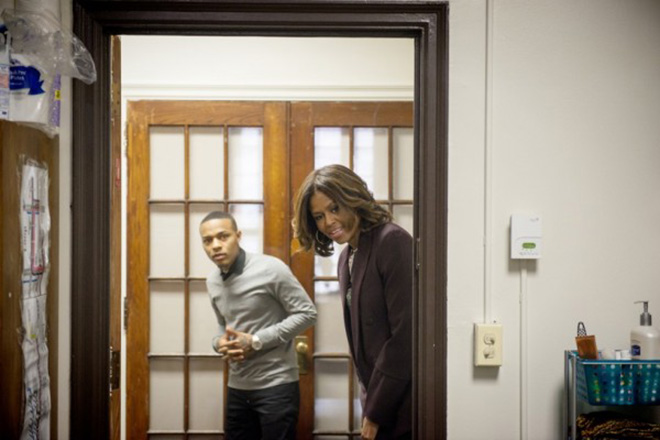 According to the White House, the First Lady specifically requested the rapper/actor and “106 & Park” host for the event — an annual college visit called “Escape to the Mecca” (a nod to the university’s nickname “the mecca.”)

“This isn’t bad,” Obama said as she stepped inside a dorm room in Frazier Hall where one enterprising student had the perfect product placement on her desk: a portfolio and résumé. During the sneak peek, Obama encouraged the visiting students to step in and look around too. “You might be living here. I’m just visiting,” she said.

As Obama made her way through Howard’s famous quad, posing for photos with the Chicago group, female Howard students inside the dorms shouted greetings through open windows. “Hi Michelle!!!” several young women screamed, prompting more fans of the first lady to also shout hello. “Michelllllle! First lady! We love you.”

Later that afternoon at a roundtable discussion led by Bow Wow, the rapper recalled his first time voting, casting his ballot for Barack Obama. “I remember him saying how much they needed us, the youth. It’s us that’s going to shape this world and turn it around,” said Bow Wow. “Maybe the next president is right here in this room.”

The first lady said she was “very fond” of Bow Wow, whom she met during a 2013 appearance on BET’s “106th and Park,” the hip-hop talk show he co-hosts. She praised his commitment to education and encouraged the students to pursue higher education. “No longer is high school the bar. That is not enough in today’s globalizing economy.”

One high school student said she planned to pay her enrollment fee for Howard that very day, adding “this has been the most phenomenal day of my life.”

First Lady Obama and Bow Wow’s appearance at Howard University comes just days after it was announced that Hip Hop mogul Sean “Diddy” Combs — who was a Howard student as a business major in the late 1980’s, but dropped out in 1990 after two years — will deliver the school’s commencement speech to the Spring 2014 graduating class. The visit to the campus is part of the First Lady’s initiative promoting higher education, which is in line with President Obama’s “North Star” goal. If everything goes through as planned, by 2020, America will once again have the world’s highest proportion of college graduates.

“We have to have a hunger for education like we had when our parents and grandparents were fighting for us to have a right to come to these schools and get the education,” Mrs. Obama told the Chicago high school students Thursday. “So now it’s up to you all to take that baton and do the very best you can with it.”