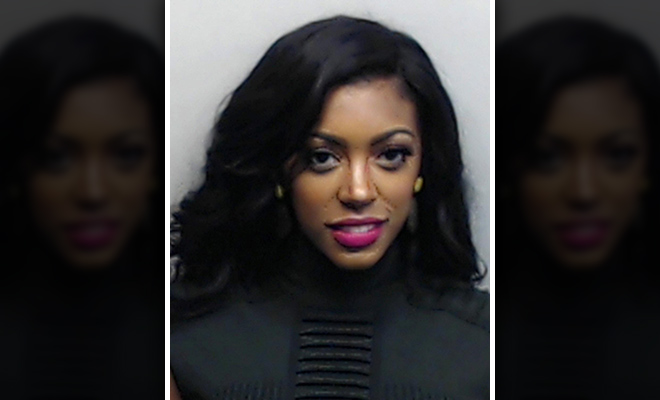 “Real Housewives of Atlanta” star Porsha Williams posed for this glamorous mugshot after she turned herself in to police Wednesday (Apr 16) after an arrest warrant was issued for the beatdown she signed, sealed and delivered to Kenya Moore last month during the taping of the show’s sixth season reunion special.

TMZ reported yesterday that Porsha was a “wanted woman” due to Kenya filing a police report and pressing charges against her reality co-star. That same day, Williams surrendered herself to the Fulton County Sheriff, who booked her on one misdemeanor count of simple battery.

Porsha bailed herself out on a $2,000 cash bond and is said to be “fully cooperating with investigators,” while she “looks forward to clearing her name.”

When news of the brawl hit the press, a source explained exactly what went down to E! News:

“Kenya had been pushing Porsha’s buttons and there was a lot of heated conversation back and forth between them. Finally, Porsha stood up, which led Kenya to stand up. Porsha charged Kenya.

“There were a few moments of hair pulling, but it was broken up in a matter of seconds. No one dragged anyone across the floor. A producer, security and even Andy [Cohen] stepped in to quickly separate them. It was a joint effort. In the end, no one was hurt.”

Moore reportedly called police after the brawl, which was captured on camera and will be shown the three-part reunion special, which kicks off this Sunday, April 20th at 8pm. (And WE. CAN’T. WAIT!)