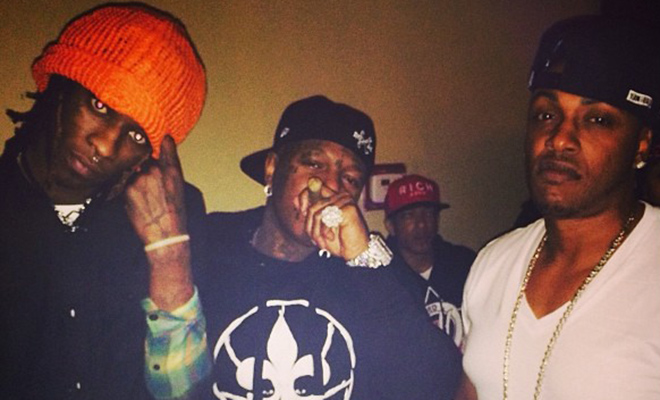 Young Thug may be the newest member of the YMCMB family, according to recent reports.

The rapper — who may or may not be Hip-Hop’s first openly gay trap rapper — has been a hot commodity since releasing street bangers “Stoner” and “Danny Glover,” the latter of which Nicki Minaj later hopped on and made an even bigger deal.

Earlier this month, Birdman blessed Young Thug with a GTV vodka bottle chain, which sparked much speculation on the Internet over Thug possibly signing a deal with Cash Money.

Also, this past weekend during 2014 NBA All Star Weekend in New Orleans, Thug was spotted stepping out of a Red Maybach with Birdman, who was also celebrating his Birthday in his hometown.

Thug also spent the majority of his weekend partying it up with the rest of the YMCMB family.

At the NBA All-Star … Thanks to Fox #YMCMB #RICHGANG #YSL pic.twitter.com/9jSwTBrZ4e

Mass Appeal happened to catch up with Thug during the NBA All-Star festivities and asked the rapper if he had signed a deal with the label, to which he responded, “Yeah. I signed.”

What’s more, in his latest Instagram pic “Thugger Thugger” is wearing a hat with the word “RICH” on it:

If Young Thug isn’t pulling our leg and is really telling the truth about signing with YMCMB, we’re interested in seeing where this goes!

UPDATE: Young Thug is DEFINITELY signed to Cash Money! Via our homies from The Smoking Section:

During the New Era/YMCMB event at the Republic celebrating Birdman’s birthday, the DJ made an important announcement:

Young Thug is the newest member of the YMCMB team. Thugger was definitely in attendance as well, snapping pics and hanging out with his apparent new label mates.

Get ready for the “Stoner” life to go mainstream…well…mainstreamier.