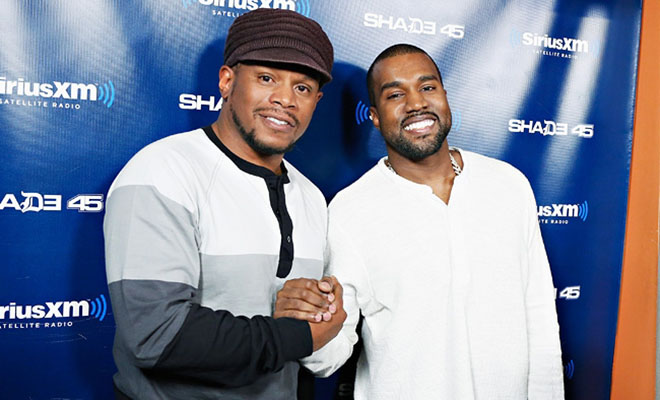 Kanye West still feels some type of way about being put in his place by not just one, but TWO, radio personalities live on the air last December. (Go here and here to refresh your memory.)

In the middle of performing “Touch The Sky” at his concert Thursday night at Penn State, the notoriously outspoken rapper went into this weird rant about radio DJs, specifically calling out Sirius XM’s Sway Calloway and Charlamagne Tha God from Power 105’s “Breakfast Club.”

“Stop that shit!” yelled West, who looked to be wearing a denim kilt, as he was finishing the Late Registration track “Touch the Sky.”

“If I go to a radio interview, shut the fuck up!” he shrieked. He complained about Charlamagne “showing a picture of me walking with my girlfriend.” He explained that he works hard in the studio every night until 5 a.m. “This ain’t no joke,” he said.

The rapper then led the audience through an a capella recital of the Graduation track “Can’t Tell Me Nothing.”

“You’re trying to make a joke out of what we do?” West says. “Shut the fuck up! What the fuck you do?” Then he said that last question again in a slower, calmer way.

He paced around the stage like an angry dog. “Fuck these niggas’ names is? I am Yeezus!” And a “Yeezus” chant broke out in the audience. West ended his rant by putting his hand up “like Michael Jackson,” he said, and again yelling “Shut the fuck up!”

“Now that was a brief intermission,” he said. “We can continue with the show.”

There are some things we will never understand … and Kanye West is one of them. This NeNe Leakes GIF basically sums up what Kanye makes us feel like: