GOSSIPONTHIS.COM Celebs Madonna Lands Herself in Hot Water After Calling Her Son “#DisNigga” on... 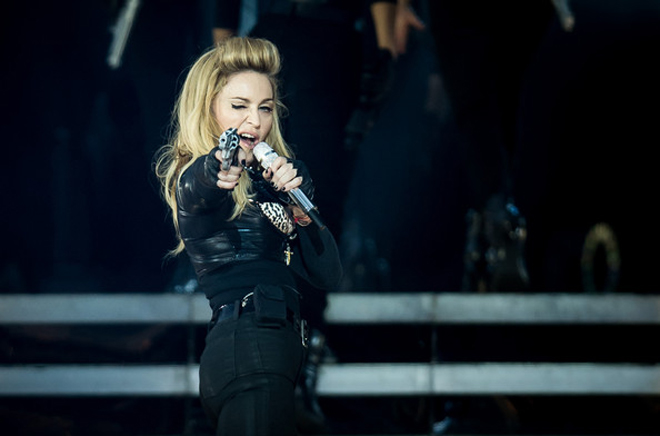 No matter how many celebrities get burned by it, white musicians and actors just can’t seem to avoid uttering the n-word in public.

While you’d expect it to come from uncultured folks like Duck Dynasty‘s Phil Robertson, who’d have thought that Madonna, the woman who made out with a black Jesus in her “Like a Prayer” video and adopted two black babies, would be the one to get in trouble for using the n-word?

In the caption to a photo of her son, Rocco, boxing on Instagram, Madonna posted this past Friday, “No one messes with Dirty Soap! Mama said knock you out!” followed by the hashtag “#disnigga.” After people on Instagram came her scalp, Madonna deleted the photo and reposted it with this caption: “Ok let me start this again #get off of my d-ck haters!”

And after the mainstream media picked up on her inappropriate social media activity, Madonna issued a formal apology to US Weekly: “I am sorry if I offended anyone with my use of the N word on Instagram. It was not meant as a racial slur.. I am not a racist,” she said.

“There’s no way to defend the use of the word. It was all about intention.. It was used as a term of endearment toward my son who is white. I appreciate that it’s a provocative word and I apologize if it gave people the wrong impression. Forgive me.”

What a tangled web we weave. Here’s the deal: I don’t think Madonna is racist. But I do think she is too stupid to act her damn age and black folks have made her feel too damn comfortable.

Madonna’s been kicking it lately with Beyonce and Jay Z. The last famous white celebrity who hung around those two, Gwyneth Paltrow, similarly got mired in an n-word scandal when she tweeted: “Ni**as in paris for real.”

So yeah, let’s blame it on Beyonce or Jay Z. (Kidding.)

But in reality, Madonna is almost 60, y’all. She is too damn old to be runnin’ around tryin’ to keep up with the Miley Cyrus’ of the world.

Her time for that kind of behavior expired a long, long, long time ago. She’s a twice-divorced mother. It’s time she act like it.

The other issue: Black people stop using the n-word in front of white folks, commercializing its use and then acting surprised when they regurgitate what you fed them.

The “#disnigga” hashtag wouldn’t have generated 1/10th of the press that Madonna’s post did if it had been posted by Rihanna.

You can argue about how black people have the “right” to use that word, but I say the rhetorical gymnastics you have to go through to justify it aren’t worth it.