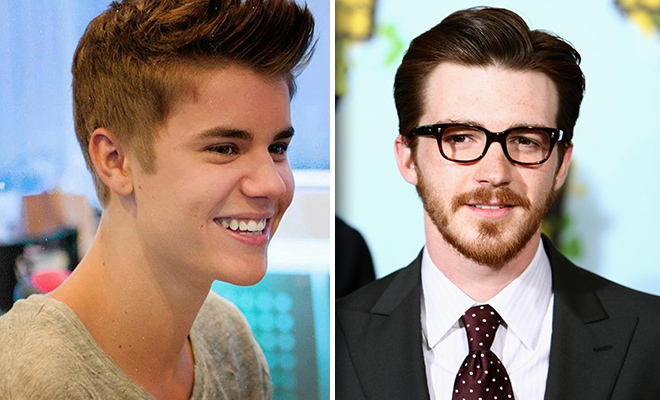 Drake Bell — of “Drake & Josh” fame — is famous for being “that guy from Nickelodeon.” Justin Bieber is famous for being JUSTIN BIEBER, the Pop SUPERSTAR. So one can almost understand the hatred the former has for the latter. (Notice how we said ALMOST.)

The Drake half of “Drake & Josh” took to Twitter the other day to slam Justin Bieber, whose home was raided by police last Tuesday after he reportedly egged a neighbors house.

During the raid, Bieber’s friend Lil Za was arrested for drug possession (Molly and Xanax), and Drake Bell shared his opinion on the popular social networking site that Za was just taking the rap for Bieber. “Hey @justinbieber how much are you paying Lil Za to take the coke wrap for ya? Be a man and take responsibility. Learn to be an ADULT!” Bell wrote, tweeting directly at Justin.

He added: “@justinbieber instead of egging speeding around your neighborhood and defacing property like a little shit you should practice your guitar!” Drake has since deleted those two particular tweets, but this one — which he tweeted last — still remains:

When is someone going to tell this idiot he can’t draw.His art is almost as bad as his music. Talentless artless pic.twitter.com/N3xiPFfQNz

This isn’t the first time Drake Bell has gone after Justin Bieber on Twitter. Just last April, Bell called Bieber out for being short, made fun of his “shiny lips” and called the Beliebers the “most insane fans in the world.”

“I love when beliebers say they loved me on [Drake & Josh] but what happened to the old Drake,” he wrote at the time. “Um Drake Parker hates pop music and would hate JB hello!!”

The Biebz has yet to respond to Drake Bell’s most recent tweets, though his good friend Milk Tyson stood up for him via his own Twitter page, calling the former Nickelodeon star a “bully.” You can peep the exchange between Tyson and Bell here:

. @DrakeBell tweeted from the elephant bar in la Mirada. He’s no longer there. They said his shift was over.

@MILKTYSON haha actually just a quick bite after Disneyland…What do you do again?

You sure seem to have a crush on jus you talk about him enough @DrakeBell stop being a bully bro it’s a bad look. I don’t twitter beef. Talk

@MILKTYSON um….nope not in love with him like you sorry

Blah blah blah I don’t talk tough on twitter @DrakeBell & I do love my brother, that’s why 1 day you’ll answer for your bully shit.

@MILKTYSON for what? I’m confused. What are we going to talk about? You can DM me at anytime ya know….

. @DrakeBell can’t DM you. And we are gonna talk about the apology you will be giving to JB.

Of course Justin Bieber’s friend Milk Tyson wasn’t the only one to come to the singer’s defense on Twitter.

It didn’t take long at all for the Beliebers — Justin’s army of fans — to team up and rip Drake Bell apart, in 140 characters or less of course, and popular celebrity Perez Hilton even joined in on the fun, calling Bell “thirsty.”

See some of the funniest tweets below:

So Drake Bell are trying to prove that he’s jealous again… I mean, he’ll never have any of these pic.twitter.com/aFxtYqWVbB

that awkward moment when @DrakeBell thinks hes so talented but his music career, or whatever that crap was, never took off. haha. Good luck

me after i set drake bell’s house on fire pic.twitter.com/xNOz7zHAHi

Not even this is enough water for @DrakeBell because of how thirsty he is pic.twitter.com/QoKGi7CriX

belieber or not, you can’t deny that drake bell doesn’t look like a total douchebag.

@DrakeBell hey here’s an idea, maybe you can ask your fairly odd parents to grant you a wish to be maybe just half as successful as JB ????????

You were always a wannabe on Drake & Josh. I guess the roles stars play do fit in their personal life some way. @DrakeBell

I saw that drake bell was trending so I figured he must of said something about Justin so I went to his twitter and pic.twitter.com/jbrrNz1dZd

” learn to be an adult ” yup , because you have that covered @DrakeBell pic.twitter.com/jfHsvxpKIE