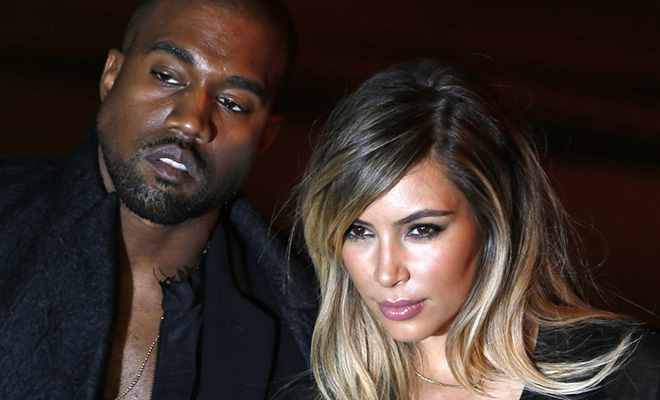 This is likely the one and only time we can actually not only defend but also commend Kanye West for going apesh*t on someone. The Mayans said the world was going to end in 2012, but maybe they were two years off.

According to TMZ, Kanye is now the suspect of a criminal investigation after he allegedly attacked an 18-year-old guy inside the waiting room of a chiropractor’s office Monday (Jan 13) for calling his girlfriend/baby mama Kim Kardashian a “n**ger lover” and a “stupid slut.”

The gossip site reports that while Kim was outside a medical building in Beverly Hills being swarmed by a group of photographers (which is, honestly, a normal day for Kim), all of a sudden, out of nowhere, this dorky little 18-year-old guy runs up to her and screams, referring to the paps, “F*ck these fa*got-ass n**gers!”

At that point Kim told the racist f*ck-tard that he shouldn’t be using racial slurs like the N-Word, and that’s when he screamed at her something along the lines of “F**k you bitch, I was just trying to help you” before calling her a “n**ger lover” and a “stupid slut.”

Well, of course Kim did NOT take that well. As TMZ put it, she was “hot as fish grease,” especially when as they were walking in, he continued to berate her.

When she called up Kanye and the guy overheard the rapper on the phone, he allegedly shouted “F*ck you N**ger!”

Unfortunately for the foul-mouthed teen, Kanye just so happened to be pulling up at the building, and not too long after, met up with Kim inside. And thats’s when ALL. HELL. BROKE. LOSE.

Sources say Kanye and Kim rushed into the waiting room of chiropractor Richard Hill and found the 18-year-old sitting there. Witnesses say Kanye punched the guy and Kim screamed, “We have it all on tape.”

Sources say the massage therapist in the office separated the 2 men. Beverly Hills cops were called and the 18-year-old said he wanted to press charges.

Law enforcement sources tell TMZ … Kanye is now officially a suspect in a battery investigation and they want to interview him. We’re also told the matter will be referred to the L.A. County D.A. for possible prosecution.

If this does turn into a legal situation for Kanye, it could get him in big trouble, as he’s already currently facing assault charges for attacking a photographer at LAX last July. The 18-year-old who got attacked in a doctor’s waiting room by Kanye West is on VIDEO — outside the building and before the confrontation — and he appears to taunt the paparazzi as Kim Kardashian walks in.

The barely-a-man screams to Kim, “They’re whack, dude. You have to deal with that everyday?” He then excitedly hops up the front steps like a rabbit.

The video stops as Kim walks in.

The big question here is…

Do you think Kanye West was justified for punching that d*ck head guy in the face for calling the mother of his child a “n**ger lover?” Especially considering the fact that this is the year 2014 and things like this should not even be happening, but sadly … it does, and will continue to.

Kim also claims that the guy even threatened her and screamed at her: “I WILL KILL YOU SLUT!” — which inspired her to file a police report of her own in which the guy will be prosecuted for making criminal threats.

Kim has already reportedly met up with her attorneys and they are working on making that police report thing happen sooner, rather than later.