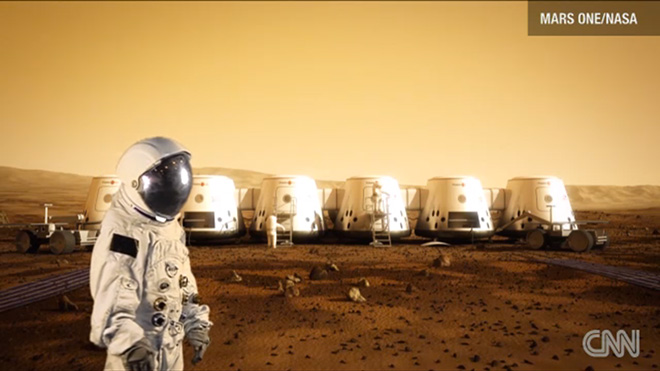 Have you ever dreamed of living on another planet? Thanks to a company called The Mars One foundation, that may be possible.

According to CNN, over 200,000 people have sent in applications to be shipped off to Mars, but only four “lucky earthlings” will be approved to colonize the Red Planet.

The catch? (There’s ALWAYS a catch…) Those four “lucky earthlings” won’t ever come back.

The technology for a return flight just doesn’t exist (right now at least). So unfortunately, they will not be able to come back as four “lucky martians” and tell us about their experience.

But the 200K plus people who have applied to live on Mars are OK with spending the remainder of their lives on another planet. (What, is our world not good enough for you people?)

As CNN points out, “there’s no Kennedy Space Center launch pad over there!” and the company behind the trip says making it one-way would greatly reduce costs.

According to Mars One, the mission is scheduled to launch in 2018, and if all goes well, the first humans to walk on Mars will be able to do so in 2025.

If you haven’t already applied, it’s too late now. Applications are closed, and the folks who made it to Round 2 will be notified by the end of the year.

The total cost for the project will be about $6 billion, with the majority of funding coming in from sponsors and partners.

One way to raise money would be to develop a reality TV concept, as Mars One CEO Bas Lansdorp points out that they will be able to produce the most unique video footage “available in the solar system,” which would have a lot of value and hopefully bring in the sponsors and partners.

But will the money come through? Will the technology really be developed by 2018 for the unmanned mission and to send people there by 2025? Will four humans survive the journey in a tight space capsule and embrace a desolate planet as their home?

As Lansdorp himself said Tuesday, “You can’t go to Mars on excitement.”

Time will tell whether prospective applicants can go at all.