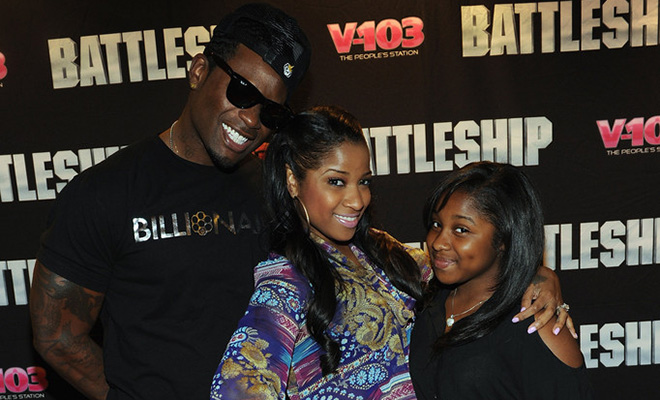 Toya Wright, reality star and ex-wife of Lil Wayne, wasn’t even in jail for a total of 24 hours, but she says the experience was enough to emotionally scar her for life. So much so that she is adament that she will NEVER go back to jail on account of her being so traumatized by the things she saw on the inside.

Antonia “Toya” Wright (née Carter), who was once married to Lil Wayne (they have a teenage daugther together named Reginae Carter — pictured above) but is now married to Hip Hop personality Mickey “Memphitz” Wright (also pictured above), was arrested in College Park, GA Tuesday night after cops discovered a warrant was out for her arrest during a routine traffic stop.

According to TMZ, Toya — who had been spending the night celebrating with her husband on his birthday — was booked at the local county jail and was eventually freed on $290, but not before experiencing what she described on Instagram as “one of the most devastating” nights of her life.

She said it was so bad that she doesn’t even want to leave her house right now. Yikes!

Responding to the TMZ story on her Instagram page, Toya wrote:

Wow!!! It’s true I was jailed due to a old ticket that I thought I had taken care of but it was not. I try my best to take care of that sort of thing quickly but some how the ticket slipped through the cracks.

I spent a day in jail and I must say that this experience was one of the most devastating of my life. I wouldn’t wish jail time for my worse enemy.

Everyone that gets locked up isn’t a danger to the community. Many people are in jail are just like me for a ticket that was either forgotten or thought to be taken care of. But the way most are treated is inhumane.

I never thought in a million years that the kind of things I’ve witnessed went on. The situation was so bad that I don’t even want to leave out the house.

After my ordeal I am seriously contemplating being an advocate of better treatment for prisoners. Please believe I’m working on my lightening up my lead foot and if I do mess up and get another ticket, that day it will be taken care of.

She later tweeted this:

I want to thank the cops at College Park jail for being so helpful to me…Not all cops are A-Holes.

After being transported from one jail to another for a freaking traffic ticket. I met some cool and helpful cops at College park Jail. Thank you guys for being so sweet and helpful to me……What a way to celebrate my hubby’s bday.

Toya didn’t elaborate on what exactly was so “devastating,” or what type of “inhumane” treatment she witnessed (or may have even experienced first-hand), but whatever it was, it must have been pretty bad, right?

She said she wouldn’t wish it on her “worst enemy,” so that means she wouldn’t even want K. Michelle to have to go through that! That’s pretty deep…