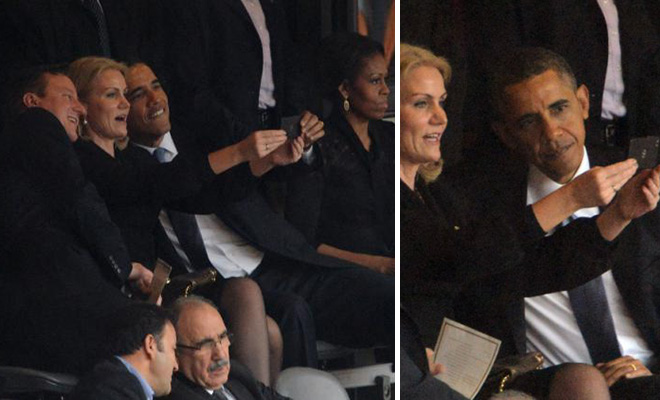 Nine times out of ten, taking a selfie out a funeral is an awful, awful thing to do.

But when you’re the “Leader of the Free World,” you deserve to get a pass, making yourself that one time out of ten that makes funeral selfies acceptable. Or at least you should be able to, right?

President Obama was attending a memorial service for Nelson Mandela Tuesday (Dec 10) in Johannesburg, South Africa when he, along with British Prime Minister David Cameron and Danish Prime Minister Helle Thorning-Schmidt, got the urge to take what is known on the Internet as a “selfie.”

A series of hilarious images capturing the moment, snapped by a nearby press photographer, shows First Lady Michelle sitting off to the distance with her arms folded, appearing as if she doesn’t approve of what is going on around her. In one photo, it looked like the First Lady had traded seats with the President, sitting herself her squarely between him and the Danish PM.

This is too funny. Michelle Obama steps in! (Picture via @mattiastesfaye) pic.twitter.com/gmDxeK8IJ1

Of course the Internet ate that up like Thanksgiving dinner, and the story went viral online within minutes, with everyone pointing out the comedy in the sequence of images. But not everyone thought it was funny.

“Why do Cameron and Obama feel the need to behave like idiots?” asked Daily Telegraph writer Ian Martin. He continued:

What on earth is going on? Why do world leaders now behave like this? And at a memorial service? Perhaps it is just that the current generation – my generation – is so appallingly spoiled that basic notions of decorum have been shot to pieces. The materialistic search for self-gratification trumps all.

Why let a fuddy-duddy thing like manners get in the way of a social media opportunity, where we can put ourselves at the centre of everything, clowning around like muppets watching a Lady Gaga concert, grinning at the camera and then tweeting the results.

The infamous Tumblr page “Selfies at Funerals,” which has been documenting the trend for months, announced that it would be shutting down, seeing as no funeral selfie in the world can top one of the President of the United States at a memorial service for Nelson Mandela.

Photographer Roberto Schmidt — the man behind the “selfie” images of the three political figures — later claimed in a blog post on AFP explaining the story behind the photos that Mrs. Obama was “joking around” with everyone just a few seconds earlier and the “stern look” on her face had just been “captured by chance.”

…suddenly this woman [Danish Prime Minister Helle Thorning Schmidt] pulled out her mobile phone and took a photo of herself smiling with Cameron and the US president. I captured the scene reflexively.

All around me in the stadium, South Africans were dancing, singing and laughing to honour their departed leader. It was more like a carnival atmosphere, not at all morbid.

The ceremony had already gone on for two hours and would last another two. The atmosphere was totally relaxed – I didn’t see anything shocking in my viewfinder, president of the US or not. We are in Africa.

I later read on social media that Michelle Obama seemed to be rather peeved on seeing the Danish prime minister take the picture. But photos can lie.

In reality, just a few seconds earlier the first lady was herself joking with those around her, Cameron and Schmidt included. Her stern look was captured by chance.

I took these photos totally spontaneously, without thinking about what impact they might have. At the time, I thought the world leaders were simply acting like human beings, like me and you.

I doubt anyone could have remained totally stony faced for the duration of the ceremony, while tens of thousands of people were celebrating in the stadium. For me, the behaviour of these leaders in snapping a selfie seems perfectly natural.

I see nothing to complain about, and probably would have done the same in their place.

It was interesting to see politicians in a human light because usually when we see them it is in such a controlled environment. Maybe this would not be such an issue if we, as the press, would have more access to dignitaries and be able to show they are human as the rest of us.

I confess too that it makes me a little sad we are so obsessed with day-to-day trivialities, instead of things of true importance.

In other words … take the stick out of your butts, and lighten up people!