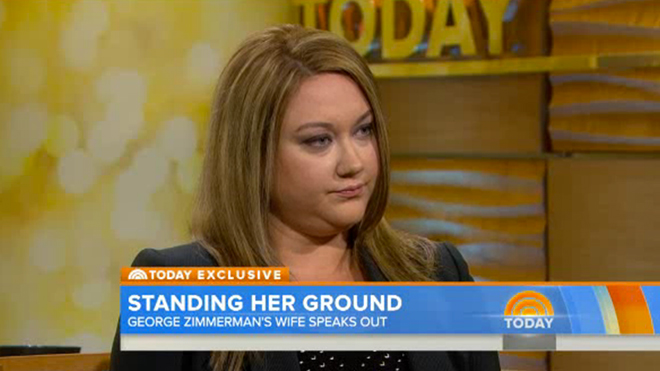 Shellie Zimmerman, the estranged wife of child killer and wanna be cop George Zimmerman, said in an interview last week with the “Today” show’s Matt Lauer that George has “changed” ever since he was acquitted of Trayvon Martin‘s murder, and he also went on a “victory tour” after the trial.

Shellie told Lauer that she isn’t sure exactly what happened the night George encountered an unarmed Trayvon Martin in February 2012, and though she says she’s “conflicted” about whether or not he acted in self defense, she doesn’t believe Zimmerman profiled the African American teenager.

“He did not profile Trayvon Martin,” she said.

“This person that I’m married to that I’m divorcing, I’ve kind of realized now that I don’t know him,” she told Matt Lauer on Thursday (Sep 26). “And I really don’t know what he’s capable of.”

Shellie said she also had doubts about his “innocence” in the case. “I think anyone would doubt that innocence because I don’t know the person that I’ve been married to,” Shellie responded. “I have doubts, but I also believe the evidence.”

“I’m conflicted on [whether it was self defense],” she said. “I believe the evidence, but this revelation in my life has really helped me to take the blinders off.”

Since the trial, Shellie says her now estranged husband treated her like she’s “disposable” and went on a so-called “victory tour” without her.

“He just kind of treated me like I was disposable,” she said. “After standing by him, he kind of left and kind of went on a victory tour without me. I thought that I was living a life with him and that we were going to kind of rebuild after all this, and he had other plans for me.”

Last month, George and Shellie Zimmerman were involved in an altercation at a home they once shared in Lake Mary, Florida, in which George may or may not have pulled a gun out on her and her parents and also punched her father in the nose.

In police reports from the time of the incident, Shellie claimed her husband smashed her iPad on his leg and cut it into pieces with a pocketknife, while George said he took the iPad after she tried to hit him in the back with it. Her father, David Dean, told police that George punched him in the face. Robinson described Dean as the aggressor, telling police he had to intervene to restrain an enraged Dean “so that George could get away from him.”

Shellie told police that during the argument, George “reached his hand into his shirt to what she assumed was a gun.” A witness, Eugene Johnson, told police he saw George “very aggressively” reach for what he thought was a gun and tell Dean, “Come towards me, you are threatening me.” However, Johnson did not actually see a gun, and police said no gun was found on George.

“I absolutely stand by my story,” Shellie told Lauer. “I did not see a gun, but I know my husband. I saw him in a stance and a look in his eyes that I’ve never seen before. His shirt was halfway unbuttoned, and he was putting his hand in his shirt and saying, ‘Please step closer, please step closer,’ and so I think that just logically I assumed he had a gun on him.”

George wasn’t jailed and no charges were pressed, but he was detained by authorities when they arrived on the scene. Looking back on the situation, Shellie says she regrets not pressing charges.

“In hindsight I should’ve, and I really regret that, but I’m on probation and the officers made it very clear that day if I pressed charges we were all going to go to jail and I would’ve been the only one to stay there,” she told Lauer.