GOSSIPONTHIS.COM Pop Culture “Basketball Wives” Recap: Tami and Shaunie Talk About Each Other to Other... 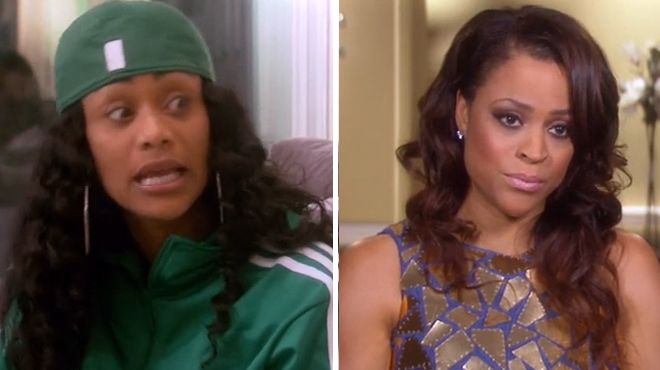 Remember all that talk about how the fifth season of “Basketball Wives” was going to be completely different and highlight the positive side of the NBA’s ex-wives, almost-wives, jumpoffs, scallywags and baby mamas? These tricks ain’t change nothin’ but the Malaysian hair systems on their heads. Cause here we are in 2013 and they’re still squabbling over the petty things.

Crazy Tami has it in her head that Shaunie O’Neal, her ride or die chick, is out to get her. She is BOTHERED by Shaunie’s so-called warning to Tasha Marbury that things could go “real right or real wrong” with Tami. Yes, because that’s the most offensive thing anyone has ever said about Tami Roman.

Mind you the two ladies already exchanged words over the incident and supposedly agreed to disagree about whether the statement was offensive, but Tami just cannot stop running her mouth about it.

So she runs over in a Missy Elliot Adidas tracksuit to holler at Ev about the whole Shaunie situation. I am not sure WHY Tami is butching it up for this scene, but she’s pretty damn convincing as a stud. I bet she used to put Royce over her knee and have her way with that lil’ thang on previous seasons.

But yeah, while Tami is over there grinding her gears about Shaunie, Evelyn astutely reads Tami in the confessional.

“I feel like Tami is trying to stay out of trouble and saying she’s changing but meanwhile you’re nitpicking something that’s so minor,” she says with exasperation.

Yep. Tami, you can’t begrudge people for warning others that you’re a little off by then acting off. You’re digging a deeper hole for yourself, lady.

Did I mention that Tami also threatened to put hands on Shaunie if things went to the left? Is this Tami Roman on my TV or Gangsta Boo? She’s so damn aggressive.

Evelyn suggests that all four ladies, Tami, Tasha, her and Shaunie need to get together to square away things. Great, so that means “real wrong or real right”-gate is gonna drag on for how many more episodes? Kill me now, please. Poor Tasha isn’t even a character on this show. She’s a throw pillow for Tami to lob at Shaunie’s head. Nothing more, nothing less.

Tami warns Tasha that she should avoid any problems with her by confronting her directly with any issues she may have with her. Yes, because that always works out well with Tami.

“Most people do not listen when I offer them advice on how to deal with me. Hopefully, she will listen,” Tami says with the warmth and kindness of a great white shark. Next up, Tasha hits up Shaunie to relay all of the details about her lunch with Tami. Good grief, can someone get me off of this merry-go-round? I’ve already vomited on myself.

Shaunie, again, offers shady backhanded comments about Tami calling her a “sweetheart” who just happens to have “her things.” She keeps saying she loves Tami to death, but at this point, the love is looking about as real as the Yaki on Tami’s head. Last stop, Shaunie and Evelyn meet up to discuss the Tami meeting. Once again, Evelyn plays Katie Couric and gives Shaunie the report. She mocks Tami’s butch track suit and conveys the physical threats that Tami so callously hinted at.

“Punching me in the face?” Shaunie asked. “Let me tell what’s not gonna happen, none of this [hand motion] and punching in the face.”

Shaquille O’Neals ex-wife is a lady first and foremost. But don’t get it twisted, there’s a hoodrat lying dormant within who will handle her business if necessary.

“Do not put your hands on me. That’s all. Cause I’m not that person. But trust me, if we need to, ok!” Shaunie adds.

Alright then. So this whole Tami/Shaunie fight is gonna be a major plot point for the rest of this season. We have a lot more of this rotten onion to peel folks. For all of Tami’s bad behavior, you can’t help but feel for her as she watches her mother, Nadine, wither away from pancreatic cancer.

In a touching moment between Tami and her mother, the two connect while they’re out for a spa day. Tami’s mother looks surprisingly healthy for someone undergoing chemo for terminal cancer. Tami clearly struggles with serious, emotional issues and she attempts to joke her way around the uncomfortableness of her mother’s mortality. But the show handles it all in a very classy manner as mother and daughter share their fears about death, life and dignity.

“We have to be real with that. That day’s coming. I mean we all gonna have it one day, but mine’s a little sooner,” Nadine says. “It’s just a great moment to be sitting with you and sharing your love. I appreciate that.”

More of this Tami would help Ms. Roman build the image she covets so badly. But then again, this Tami probably wouldn’t draw in the necessary ratings to keep this show on the air. In the neverending soap opera that is the Chad/Evelyn saga, we’re forced to sit through yet another red-nosed, teary eyed therapy session between Evelyn and a black woman with a fade. I’m tired of it, you’re tired of it and there’s nothing revealing to be discussed here.

Can we stop dragging this out?

Part of the reason this whole Chad/Evelyn thing is unfulfilling and frustrating from the viewer’s point of view is that Chad isn’t involved in the series and the bulk of the action takes place off camera.

For example, Evelyn decides to accompany Chad’s daughter to an appreciation dinner with Chad where she reunites with her ex for the first time. For some bizarre reason, VH1’s cameras didn’t capture any of this. So instead we have to hear about what went down as Evelyn recounts the meetup to Suzie. Suzie expresses her discomfort with seeing Evelyn back with Chad, in part, due to her own experiences with domestic violence, which saw her jaw get broken.

Domestic violence has played a leading role in Evelyn’s storyline this season and it’s honorable that Ev understands the influence her actions carry as a public figure (unlike Rihanna…) but these reflections from Evelyn feel hollow.

“No one would’ve guessed in a million years that me and Chad had issues,” Evelyn says. Um, actually a lot of people said exactly that and that your marriage was a sham doomed to implode. One of them was your daughter. Open your ears and your eyes, Ev.