Marcus T. Paulk, otherwise known as Miles from Moesha, turned himself into authorities on Thursday after he allegedly punched and kicked his girlfriend in the stomach — subsequently putting her in the hospital.

According to TMZ, the alleged victim’s name is Andi Roxx, and apparently the fight between the Paul and Roxx started at a nightclub in Beverly Hills called Confidential.

The two reportedly got into a verbal argument because Roxx, a singer, was not giving Miles enough attention in the club. After they went home, the argument got physical.

The next morning, Roxx says she went to the hospital with internal injuries. Law enforcement sources say police responded to the hospital soon after, where Roxx told them what happened.

Police later made contact with Paulk himself and his attorney arranged for Paulk to turn himself in today. We’re told the actor is currently being booked.

My dude, her stomach? What kind of an animal are you?

Listen, I never liked Miles’ character and I care even less about the actor behind it now.

Dee (Sheryl Lee Ralph) needs to call Frank (William Allen Young), sit Miles down and fuss at him profusely while “Love Is Blind” plays in the background.

Then Moesha (Brandy) needs to show up, curse him smooth out again as she drives him to a battered women’s shelter to volunteer. After that, have Niecy (Shar Jackson) put fear into his heart while Kim (Countess Vaughn) tells him exactly where he should go to get counseling. 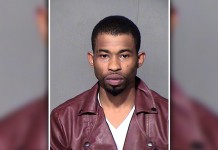