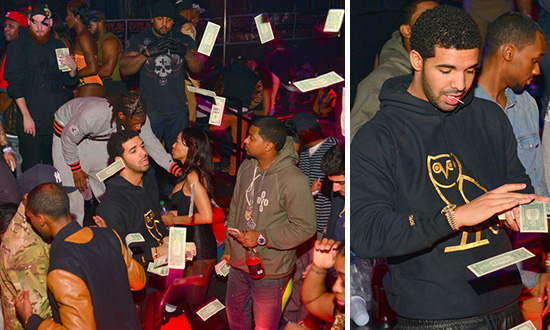 This past weekend in Charlotte, North Carolina at Cameo Nightclub, Drake opened a cardboard box filled with cash. And how much cash was in that box, you ask? Try $50,000 worth! That’s how much.

According to TMZ, another named rapper Bleu Davinci contributed an additional $25,000 to the money storm. Talk about making it rain. Drake and Bleu Davinci spent more than what some people make in an entire year, maybe even two. Guess it pays off to work the pole, sometimes.

But more on this Bleu Davinci guy. It’s said that he is a part of the country’s most widely known drug trafficking organizations BMF — the Black Mafia Family.

The movement was originally based in Detroit in the 80s, but ended up spreading across the United States, housing hundreds of members. The organization made over $270 million during its prime.

Guess Bleu Davinci is still spending some of that long money since he’s in the club making it rain with Drake, who could definitely use the street cred.

MORE PHOTOS OF DRAKE MAKING IT RAIN THE STRIP CLUB BELOW: