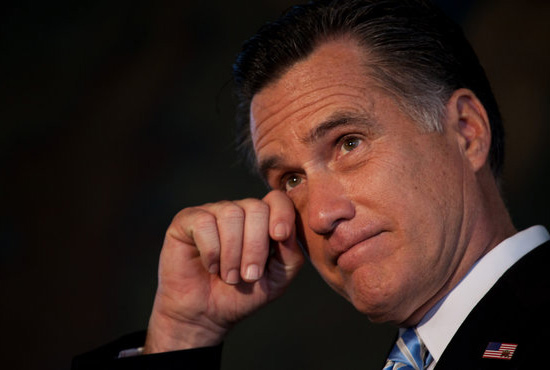 Mitt Romney supporters have been seen mourning the loss of their preferred candidate from the 2012 Presidential election, and the dejected sentiment that most are carrying seems to be reflecting in Romney’s presence in social media.

Though Romney’s numbers always paled in comparison to the President’s he still experienced a rapid growth leading up to the election. He has amassed over 1.7 million followers on Twitter and over 12 million likes on Facebook. (FYI: The president has over 33 million Facebook likes and over 23 million Twitter followers)

However, today and the most recent days since the election, online support for Romney is plummeting at an extremely fast rate. Since the election, Mitt has thanked his supporters with messages and photos from the campaign. In return for his thank you’s, Romney’s Facebook likes have been falling at a rate of over 15,000 each day since the election.

In fact, in the three days following the 2012 election Romney’s Facebook likes dropped by over 50,000.

Whether this is upset supporters giving up hope or inflated bot accounts dropping cannot be said for sure.

It is most likely a combination of both, but either way it shows just how quickly a candidate can be forgotten even in the age of social media.

Of course the ignorance that spews from both sides during the political elections also made its mark during this year’s election. In the end we are left with some pretty hilarious memes to remind us of Former Governor Romney’s Presidential aspirations.

For those who are loyal Romney supporters it may be tough to watch the ship sink as others jump for safety.

It’s noble to figuratively die with the cause but then there is a certain level of Internet troll who will remain in the trenches continuing support for the lost cause.

Posts like this from Facebook user — whose embedded spammish link leads you to a random DJ page — embody this persistent nature:

“Mitt Romney will come back stronger next term! Here’s a speech of all his goals during the next four years to prove to America he should be our leader <3

As you can see, the losing candidate’s page is somewhat of a dead zone so the falling number of users who are supporting is fully justified. To those who are jumping ship it is not to late to rally as a nation and support our President going forward in his second term.