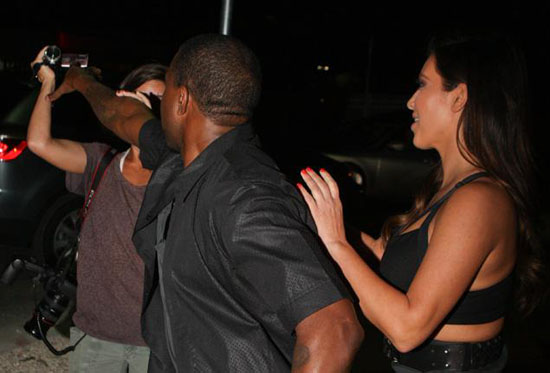 It’s been a minute since Kanye West has had a violent episode with another person, but it looks like the controversial rapper is back to his old ways.

As Kanye and his girlfriend Kim Kardashian were making their way out of NYC restaurant Prime 112 Sunday night (Oct 4), a brave photographer thought it would be cool to point out to the couple that Reggie Bush (Kim’s ex boyfriend) and his pregnant girlfriend Lilit Avagyan were dining right across the street at Prime 112’s sister restaurant Prime Italian. (See photographic evidence below) In an obvious attempt to antagonize Kanye, the female paparazzo then proceeded to ask Yeezy if he had congratulated Reggie on the news of his new baby … and that’s when Kanye lost it. That little angry man that lives inside of him was unleashed!

And his girlfriend couldn’t do nothing but hold him back as she tried to contain her own laughter. (Notice the smirk on her face below?) That poor woman didn’t even see it coming. Geez … a simple “no comment” or just plain silence would have worked, Ye.

Otherwise, let your security handle physical attacks against the paparazzi, like your buddies Jay-Z and Beyonce.