GOSSIPONTHIS.COM News Rugby Jock Says He Woke Up Gay and Wanted to Become a... 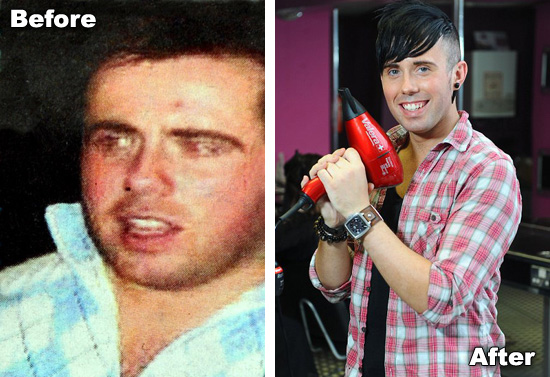 Chris Birch was just your average 26-year-old Welsh man who was engaged to a woman, worked at a bank, and loved sports (especially rugby). He also enjoyed other “guy” stuff, like drinking beer with his friends and showing them cool tricks at the gym.

But all of that changed one day after he had a freak accident while trying to cut a black flip, and broke his neck and had a stroke … and woke up gay.

And since he no longer had an interest in the opposite sex and other guy stuff, he broke up with his fiancee, quit his job as a banker, became a hairdresser and found himself a 19-year-old boyfriend, who he now lives with above the salon where does hair, according to the Daily Mail.

“I was gay when I woke up and I still am. It sounds strange but when I came round I immediately felt different,” Birch recalled. “I wasn’t interested in women any more. I was definitely gay. I had never been attracted to a man before – I’d never even had any gay friends. But I didn’t care about who I was before, I had to be true to my feelings.” He continued, “Suddenly, I hated everything about my old life. I didn’t get on with my friends, I hated sport and found my job boring. I started to take more pride in my appearance, bleached my hair and started working out. I went from a [266 pound] skinhead to a [154 pound] preened man. People I used to know barely recognised me and with my new look I became even more confident.”

After seeking the advice from a neurologist, Birch learned that his new-found homosexuality could be due to the stroke opening up a different part of his brain.

Joe Korner, director of communications for The Stroke Association in the U.K. says that he’s never personally heard of a stroke changing someone’s sexuality, however, he doesn’t doubt the stroke did impact Birch’s life in some way or another.

“Strokes are traumatic, life-changing experiences, which can make you reassess life and your feelings so perhaps that’s the reason behind it,” Korner told CBS News. “Whether or not the stroke turned Chris gay, or whether he was gay anyway but unaware of it, his experience seems to be a positive one, which is great.”

When asked if he had any regrets about being transformed into a gay man, Mr. Birch said, “I’m nothing like the old Chris now but I wouldn’t change a thing. I think I’m happier than ever, so I don’t regret the accident.”