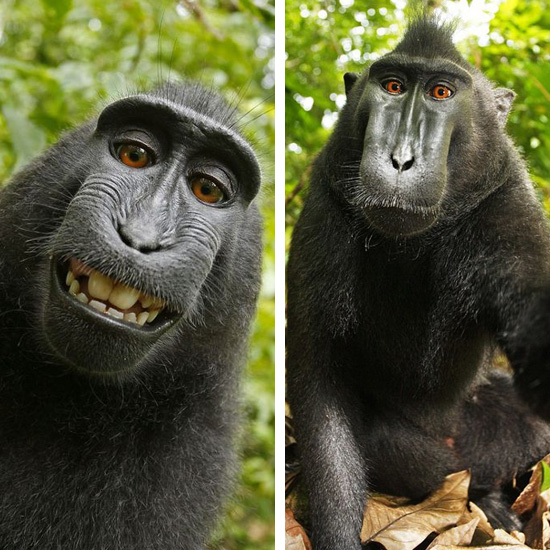 A shutter-happy monkey turned into an impromptu photographer after he stole a camera and started taking hundreds of hilarious “self-portraits.”

According to award-winning photographer David Slater (46), while he was visiting a national park in Indonesia, a mischievous crested black macaque (a rare monkey in Indonesia) started taking pictures of himself after he and his monkey friends got familiar with the equipment. “They were quite mischievous, jumping all over my equipment,” Slater said. “One hit the button. The sound got his attention and he kept pressing it. At first it scared the rest of them away but they soon came back – it was amazing to watch. He must have taken hundreds of pictures by the time I got my camera back, but not very many were in focus. He obviously hadn’t worked that out yet.”

He continued, “They aren’t known for being particularly clever like chimps, just inquisitive. Despite probably never having any contact with humans before, they didn’t seem to feel threatened by our presence.”

Of course the authenticity of the images was questioned, but Slater says they are 100% real. “They do look strange anyway because of their punk hairdo and their reddish eyes,” he said.