Following months of speculation, Tamera Mowry has confirmed that she is engaged!

The 32-year-old former “Sister, Sister” actress announced that she will wed her longtime boyfriend Adam Housley, a correspondent for Fox News Channel, in a wedding ceremony to occur later this year. Mowry says Housley popped the question with a limited vintage design engagement ring by Viraggio while the couple were on vacation in Venice, Italy.

“I’m beyond thrilled and feel so blessed to have him in my life,” Tamera old People. “Not only is he my love, but also my best friend.”

News of Tamera’s engagement comes just one week after her twin sister Tia Mowry announced that she and her husband, actor Cory Hardrict, were expecting their first child together. According to various sources, Tia’s pregnancy will be documented by the Style Network for a reality show she’s doing along with Tamera, set to air later this year.

Congrats to Tamera and Adam on their engagement! 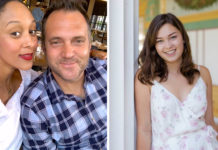